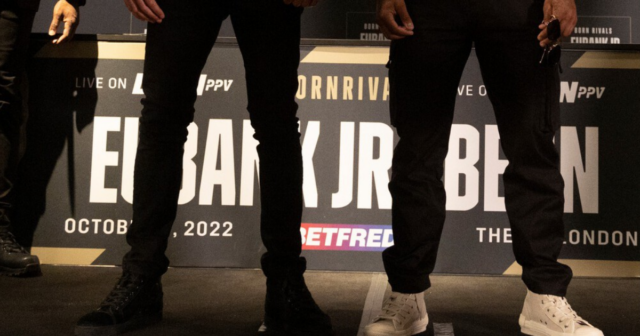 CHRIS EUBANK JR flaunted an £8,000 Louis Vuitton jacket at the first press conference for his fight against Conor Benn.

The 32-year-old middleweight will take on welterweight Benn at a 157lb catchweight at The 02 Arena on October 8. 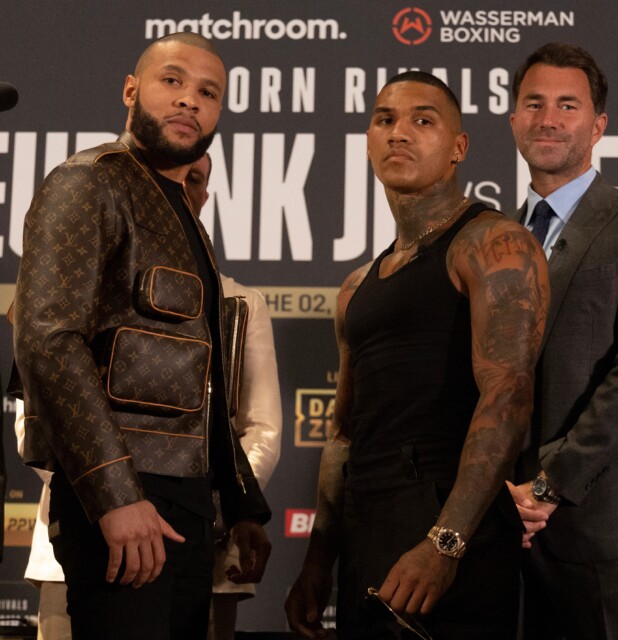 The pair came face to face today for the first time since the bout was announced – in what is being dubbed Eubank-Benn III following their fathers’ two famous meetings in the 1990s.

Eubank was visibly the bigger of the two men as they measured each other up in a stare off.

Benn is moving up from welterweight (147lbs), while Eubank Jr is dropping down from middleweight (160lbs).

Due to Eubank’s superior size, a rehydration clause limiting him to what he can weigh the next morning after the weigh-in has been put in place.

But the 32-2 fighter insists that is only in place to prevent the bout from being a one-way demolition job.

He said: “I can’t be 100 per cent when I have to go down to a weight I’ve never been to and then I can’t rehydrate fully.

“That’s fair, because if I’m 100 per cent it’s a public execution, I have to be at a disadvantage to make the fight reasonable.

“I’ll be 60 per cent on the night, and that will be enough to do whatever I want with you.”

When the dads met in 1990, Chris Eubank Sr beat Nigel Benn via stoppage.

The pair then controversially drew the second contest three years later in a clash many felt Benn did enough to win.

And Nigel’s son Conor is now motivated to seek some retribution for those two fights.

He said: “Dad had a draw the last fight, we know he should have won.

“I’m just going to go in there and handle business and I settle the score.”

Did you miss our previous article…
https://www.sportingexcitement.com/boxing/legend-mike-tyson-once-koed-a-garbage-man-with-titanic-right-hand-for-putting-favourite-pigeon-in-the-bin/