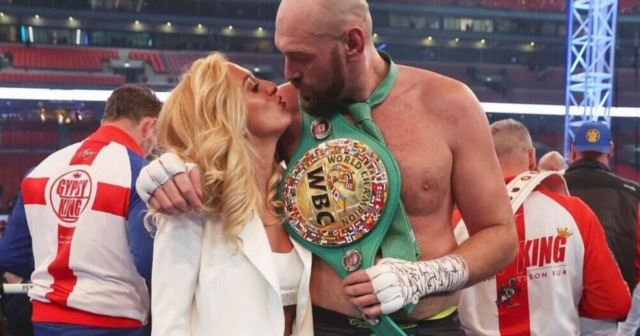 PARIS FURY celebrated husband Tyson’s knockout win over Dillian Whyte by crowning him the “greatest of all time”.

The 32-year-old mum of six took to social media after the fight to post an adorable snap of her and The Gypsy King.

Paris Fury and Tyson celebrated his victory with a kiss

Paris, who Carl Froch claimed is pregnant with her and Tyson’s seventh child, was ringside at Wembley to cheer her hubby on.

And after he delivered a devastating right uppercut to Whyte to secure a sixth round win, she jumped inside the ring for the celebrations.

Paris uploaded a snap to Instagram of the couple sharing a kiss as they rejoiced Tyson’s 32nd professional victory, with the heavyweight vowing to retire from boxing after the battle of Britain showdown.

Molly-Mae Hague also joined Paris on the night, and the pair posed backstage for a snap. 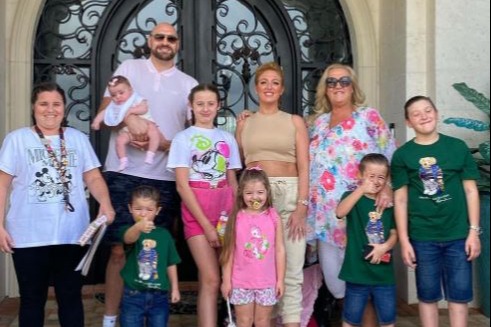 Molly-Mae was at Wembley cheering on boyfriend Tommy, half brother to Tyson, who won his fight at Wembley.

Paris stunned in an all-white outfit, calling Love Island star Molly-Mae “the next leading lady,” and “a beauty inside and out” as the social media influencer also wowed fans in a sleek black dress.

The 22-year-old was ringside to watch Tommy secure a points victory over Daniel Bocianksi and call out Jake Paul.

But despite having a front row seat to the action, Molly-Mae revealed she in fact watched the bout on the big-screen at Wembley.

Then later on in the main event of the night Tyson delivered a show-stopping punch to KO Whyte, before reiterating that he is retiring from the sport.

Speaking to BT Sport after the fight though, Paris hinted that her husband of 14-years could be tempted back into the ring.

She admitted: “I know in my heart I think the only reason Tyson would come back is for a unification fight.