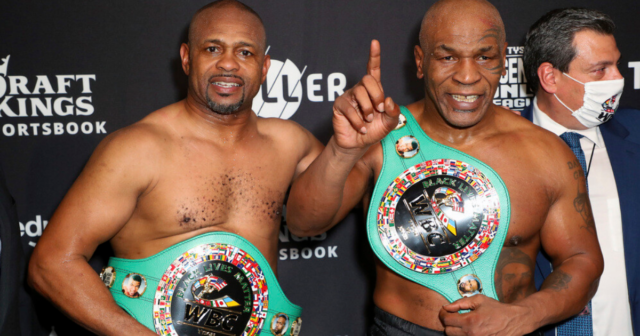 Fournier is officially 9-0 in his professional boxing career, with one no-contest, but in September he was beaten by David Haye in an exhibition.

Haye is a friend of the Londoner’s and even formerly promoted and managed him.

But he still beat Fournier in an eight-round exhibition, promoted by Triller, who also brought Jones, 52, out of retirement in November.

The American legend boxed to a draw in a similar style spectacle bout with heavyweight icon Mike Tyson, 55.

But Jones has set his fights on fighting once again, and fancies his chances against Fournier, who failed to upset former champion Haye, 40.

He told The Mirror: “I saw his fight with David Haye and I was surprised; I didn’t think he did too badly.

“I just think he bit off more than he could chew because David is much taller than him and 30lb heavier.

“You’ve got to know what you’re doing when you go in against those types of disadvantages, but I’m closer to his size so if he wants to be the ‘legend slayer’.

“I know what he’s thinking, he’s thinking that against someone closer to his size, if he can get to them with one of those bombs, he can knock me out and change history.

“I can’t see that happening but because he was willing to challenge David Haye, he must love the sport of boxing so I’d give him a shot.

“It would have to be the right situation, but I’d definitely give him a shot.”

Meanwhile Fournier, 38, returned in April after five years out of the ring and beat musician Reykon in a woefully mismatched fight.

But he is open to sharing the ring with another legend in Jones, having failed to get YouTube star Jake Paul, 24, in the ring.

Fournier said: “Roy Jones Jr is possibly one of my favourite fighters of all time, the fact that he even knows who I am is truly incredible to me.

“I want the big fights and big names and it doesn’t get bigger than Roy; his last fight was against Mike Tyson and mine was David Haye!

“I’m ready for the challenge and don’t think Roy will be able to handle my power.

“I’ll have to pause all billionaire activities and get back to the gym and train hard for him but after this win it’ll set me up for the next legend.

“It would be incredible to do it in the Middle East; Dubai or Saudi Arabia are countries I love but have never fought in.

“Respect to Roy for wanting to fight ‘The Billionaire’ – after I win I’ll give him some investment tips!”

Advertisement. Scroll to continue reading.
In this article:hewas, thechance, withone