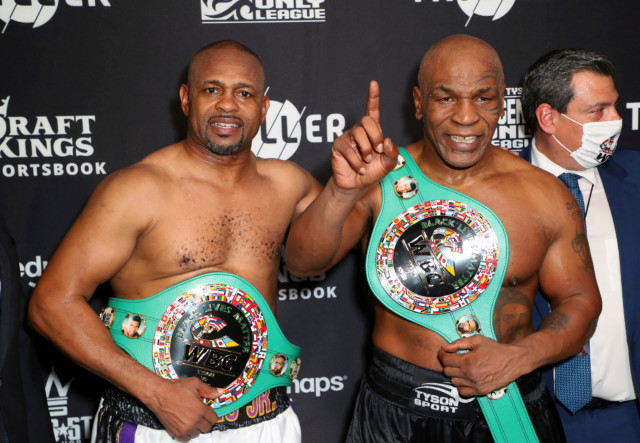 Jones is coming off an eight-round exhibition with heavyweight icon Mike Tyson last November, which ended a draw.

It inspired De La Hoya – who retired in 2008 after dominant defeat against Manny Pacquiao – to announce a return of his own.

The six-division champion revealed he will fight again on July 3, and Jones has thrown his name into the hat to face the ‘Golden Boy’.

His trainer Alfy Smith said: “I spoke to Roy today and he is feeling great, and is willing to fight Oscar De La Hoya.

“I know that they never got to fight based off weight classes before, but now would be the perfect time to give the fans a great fight that they’d thought they would get to see.

“De La Hoya has one of the greatest left hooks in boxing history, Roy has a devastating hook as well, we shall see who will be the real ‘Captain Hook’.”

Jones, considered one of the greatest of all time, initially only retired in 2018 having fought well into his late 40s.

But he was only out of the ring two years before he was selected as 54-year-old Tyson’s comeback opponent.

The American was in talks to fight Anderson Silva – released by the UFC last year – but the Brazilian, 45, will instead face Julio Cesar Chavez Jr in May.

It leaves Jones needing an opponent as he continues to train, and De La Hoya’s star power is considered the perfect option.

“This is a great fight, an exciting matchup where you would only dream it up in a video game, now we have a chance to make it a reality.

“Roy is still active and training every day, he’s in tremendous shape and his speed is still crisp.”