‘Show me the millions’ – Kell Brook, 35, refuses to rule out return for the right price just FIVE MONTHS after retiring
Advertisement 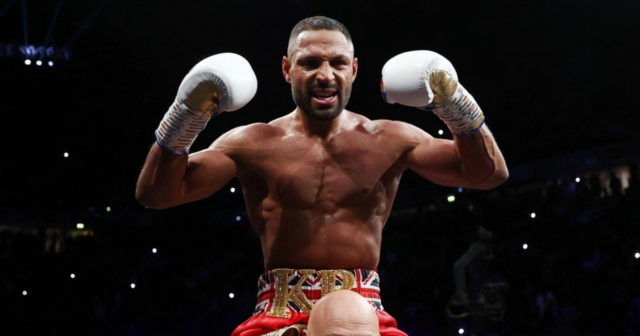 KELL BROOK refused to rule out a boxing return if the price is right.

Kell Brook after beating Amir Khan in their grudge fight

But Brook admitted he cannot completely close the door on a return fight, if there are millions to be made.

He told iFL TV: “There’s always a number. If it makes sense, business sense, then I’m coming back. Show me the millions.

He then priced himself out of facing welterweight contender Conor Benn, 25, and failed to agree terms with Chris Eubank Jr, 32.

Brook insisted he is happily retired, but the allure of another mega-money payday and crowd-pleasing fight would at least make him consider a comeback.

He added: “It’s not over until it’s over. But as we stand now, I’m retired.

“But Eddie Hearn, if he’s watching, all those promoters out there, show me the benjamins. If it excites me enough.

“When I come back and I hear these fans and stuff, it’s hard. It’s hard to walk away from it, it’s very hard.”

Khan had a rematch clause in his contract but talk of a second fight between the British stars collapsed.

Amir Khan was beaten in round six by Kell Brook

Did you miss our previous article…
https://www.sportingexcitement.com/boxing/meet-paige-van-zants-next-bare-knuckle-opponent-charisa-sigala-who-shares-x-rated-pictures-and-goes-to-war-in-the-ring/