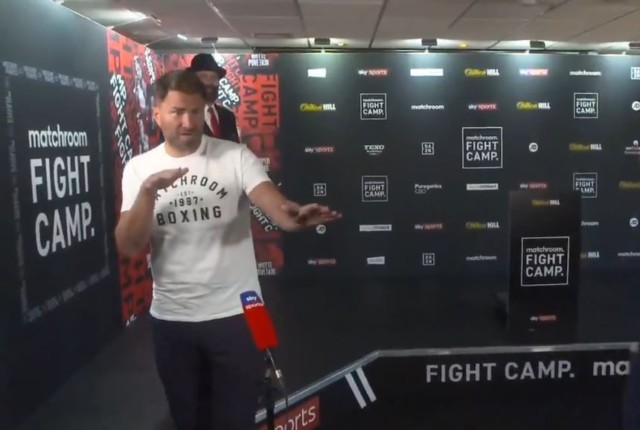 The 41-year-old has been busy promoting the first of Matchroom’s Fight Camp series, set to take place at their Essex HQ tomorrow night.

Hearn made the quip thinking he was in rehearsal 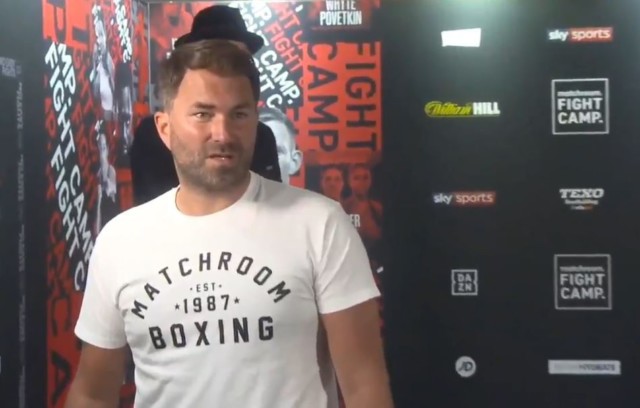 Realisation dawned on the 41-year-old’s face 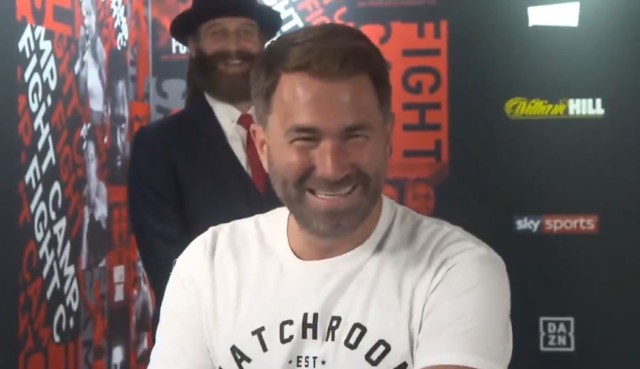 But he very quickly saw he funny side

But Hearn, thinking it was a rehearsal, decided to have a bit of fun with the Sky Sports reporter.

From the weigh-in, he put on a high voice and used the phrase: “Mother f***ers”.

Shock dawned on Hearn’s face as the mortified reporter revealed that they were in fact live… before giving way to embarrassed laughter.

The promoter was a good sport, however, later addressing his faux pas on Twitter.

He wrote: “That was awkward..when you think it’s a rehearsal

And fans on social media naturally found the incident hilarious.

One wrote: “I’m absolutely gone with that.”

While another added: “The “Gif” Gift that keeps on giving.”

And another social media user likened Hearn to a British TV favourite: “Everything about that video is hilarious.

That was awkward..when you think it’s a rehearsal

Hearn will be a busy man tomorrow, as IBF International Super-Welterweight champion Sam Eggington kicks off Fight Camp’s first main event by putting his belt on the line against Ted Cheeseman.

Huge-hitter James Tennyson also takes on Gavin Gwynne in what promises to be an exciting night of boxing.

Did you miss our previous article…
https://www.sportingexcitement.com/boxing/floyd-mayweather-blasts-conor-mcgregor-for-dance-boy-comment-in-racism-row-and-rules-out-rematch-with-ufc-star

In this article:fightcamp, onair, skysports