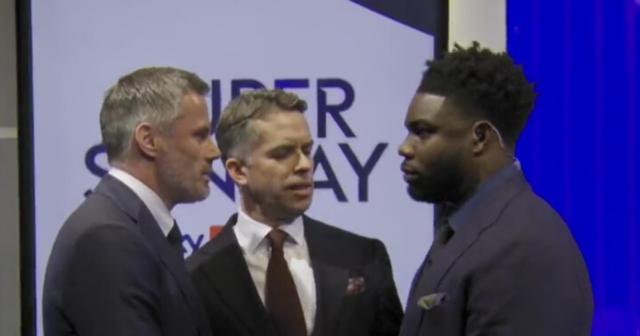 The two former Premier League footballers went face-to-face to get in the mood for Amir Khan’s all-British clash with Kell Brook and host Jones was acting as the mediator.

Carragher and Richards had a face off, mediated by JonesCarragher made the first move but caught Jones 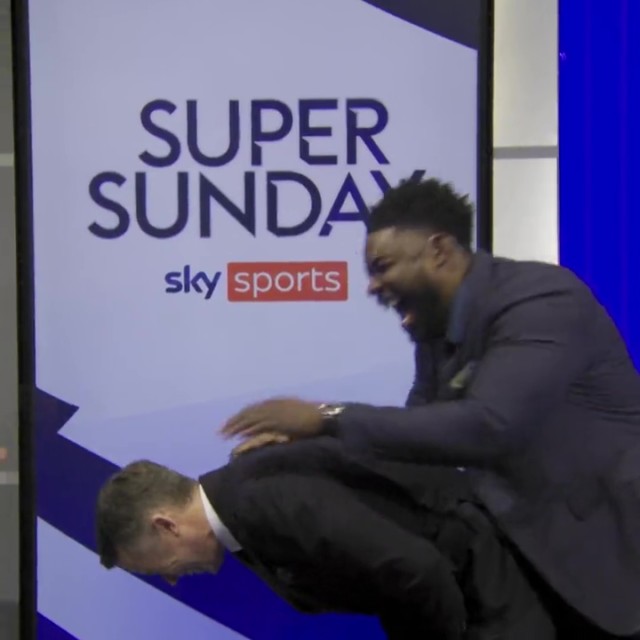 The Sky Sports presenter crouched over after receiving the blow

Jones urged the pair not to get ‘too close’, in which Carragher replied: “He doesn’t want to get too close to me.”

Carragher then jokingly pushed towards Richards but caught Jones whilst he was at it.

The trio burst into laughter as Jones walked out of the camera shot.

Carragher and Richards have become quite the duo on TV.

In last nights post-match analysis of Leicester vs West Ham, the pair shared a dance as they were explaining how Vladmir Coufal should’ve defended Harvey Barnes’ cross for Ricardo Pereira’s second half header.

On CBS’ coverage of the Champions League, the pair had viewers and colleagues in stitches when Richards decided to rattle off some Italian phrases.

To Richards’ Italian, Matteo Bonnetti, the lead Serie A analyst for the US television network, quipped: “It’s alright. He was only there for one season so you can’t expect too much.

“There were a few phrases and he was showing off in the break.

“He introduced himself pretty well. So it’s a C.”

Bonnetti is, of course, referring to Richards’ brief spell with Florence-based Fiorentina.