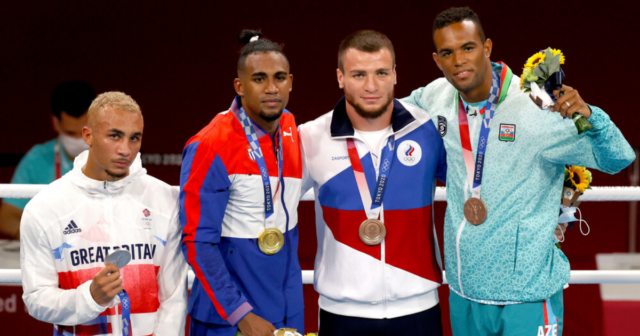 BOXER Ben Whittaker was so devastated with his Olympic final loss he refused to wear his silver medal on the podium.

The brilliantly talented light-heavyweight lit up the Games in Tokyo with his eye-catching and slick back-foot style.

But he was unable to overcome the final hurdle in his long journey to Olympic gold as he was outpointed by Cuban Arlen Lopez.

Lopez, who won gold at Rio 2016 at middleweight, beat the Brit on a split-decision.

And Whittaker was left heartbroken after defeat, so much so that he could not even bare celebrate his runner up prize, putting it in his pocket.

“I lost a gold, so to me it’s a failure so I am not going to celebrate silver at the moment.

“I am sure over the years I will look back and see what an achievement it is.”

Whittaker’s stance may appear odd, but it echoes the mindset boxing legend Floyd Mayweather had after he was reduced to bronze in 1996.

Mayweather, now 44, was robbed in the semi-finals and was left so disgusted he gave his medal to his grandmother to keep.

Years later he famously stated you cannot win a bronze if you were beaten, believing he instead ‘received’ the medal.

Whittaker, who did later wear his silver after coming off the podium, had a similar winning mentality.

He said: “You don’t win silver – you lose gold. So that is why I was so emotional. Nobody trains for silver or bronze.

“Everybody up here trained for the gold medal. I woke up this morning truly believing this was my time.

“I had the whole of the West Midlands behind me and Great Britain. Congratulations to Arlen. It was his time. He is a great boxer.

“I just have to go back to the gym, change a few things, work harder and hopefully next time it will be my turn.”

Whittaker was praised by Piers Morgan, who tweeted: “‘You don’t win silver, you lose gold. I’m very disappointed – I feel like a failure. You’re in this game to win gold.’

“Love this – finally, an athlete at these Olympics prepared to tell the truth about competing in elite sport. Good for you.”

'You don't win silver, you lose gold. I'm very disappointed – I feel like a failure. You're in this game to win gold.'
Love this – finally, an athlete at these Olympics prepared to tell the truth about competing in elite sport.
Good for you @BenGWhittaker. https://t.co/32RKabmDx5

Did you miss our previous article…
https://www.sportingexcitement.com/boxing/tommy-fury-could-face-jake-paul-next-if-he-beats-youtubers-sparring-partner-anthony-taylor-after-signing-two-fight-deal