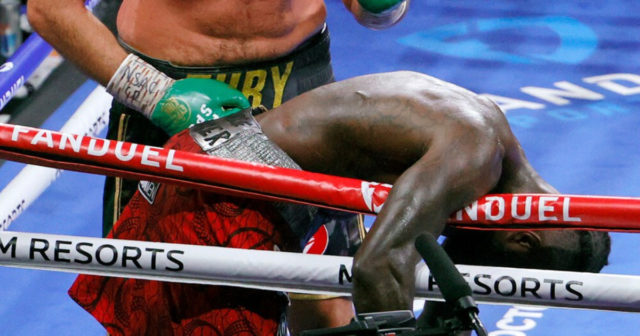 But having snubbed the Gypsy King straight after the Las Vegas battle, SunSport can reveal the hidden meaning behind the Bronze Bomber’s change of tune.

Fury called the American an ‘idiot’ and a ‘sore loser’ when he was snubbed by his great rival following last weekend’s 11-round thriller.

But the Bronze Bomber finally broke his silence with a classy message on Instagram on Thursday thanking God, his team, fans and Fury for ‘memories that will last forever’.

Many in the boxing world were stunned by Wilder’s approach – given the animosity between the two men in the build up.

But there are psychological reasons behind it which SunSport can exclusively reveal.

Behavioural psychologist Jo Hemmings said: “Emotions run high both during and just after a fight.

“The stress hormones adrenalin and cortisol are at their peak, in order to give everything you have. Both boxers will have felt this.

“But while Fury will have felt elation at winning, Wilder will have felt huge disappointment in himself in losing (as well as being in some physical pain).

“He would not have been in the frame of mind to show kindness to his victorious opponent.

“However once the rage, stress and feelings of failure have subsided, along comes a sense of reflection – in part because heightened emotions will have dropped and also because Wilder realises that it would serve him well, moving forward to be respectful to Fury.

“By channelling his words through his faith, Wilder has managed to accept his fate and congratulate Tyson in the most appropriate and dignified way he could.”

Out of nowhere, Wilder uploaded a picture in his pre-fight outfit on Thursday and wrote: “Wow, what a hell of a night!

“I would like to first and foremost thank God for allowing me to give the world another part of me that’s driven with passion and determination.

“I would like to thank my team and my fans for sticking by my side through this long process.

‘I AM A TRUE WARRIOR AND KING’

“I would be lying if I said that I wasn’t disappointed in the outcome but after reflecting on my journey, I now see that what God wanted me to experience is far greater than what I expected to happen.

“Although, I wanted the win I enjoyed seeing the fans win even more.

“Hopefully, I proved that I am a true warrior and a true king in this sport.

The Gypsy King shared the post with a handshake emoji and said: “The greatest trilogy of all time.”

Wilder had restored so much of his reputation as he floored Fury twice before succumbing late on in the instant classic, after accusing his rival of cheating his way to his February 2020 win.

But the battered and bruised American appeared to blow his chance to turn the iconic rivalry into a fantastic fighting friendship with his conduct in the ring afterwards as Fury hit out at him for not congratulating his conqueror.

But Wilder’s co-manager Shelly Finkel insisted the ex-champion in fact DOES respect Fury, and would be open to accepting the peace offering now.