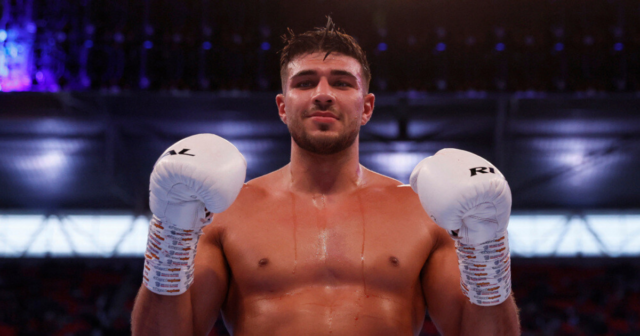 TOMMY FURY insists he’s “gutted” after his visa problems led to Jake Paul terminating their fight contract – but claims the bout can go ahead OUTSIDE of the USA.

Tyson Fury‘s younger brother argued he and his team “could never have anticipated” him being refused entry to the US.

Statement from Tommy Fury on the Jake Paul fight… pic.twitter.com/wAe37lXNcw

Former Love Island star Fury responded in a statement: “I’m gutted and disappointed in regards to issues I have faced with entry to the USA.

“This situation has been left with my lawyers as being denied entry to a country is obviously a very serious issue and needs to be resolved.

“I am confident this fight will happen when the issues get resolved.

“I want to clarify that I will fight in a neutral country that both parties can enter.

“This can be any time, any place, anywhere.”

However, reports in the US suggest Paul could already be close to arranging an alternative fight with Hasim Rahman Jr.

Hasim’s brother Sharif even tweeted it was a “done deal” – although no official confirmation has come from the two boxers themselves.

If Paul does agree that bout, it would show how frustrated he has been over Fury’s failed bid to get into the US.

The social media celebrity posted: “Fury’s received a termination notice. MVP did everything it could to help him & team.

“He wasn’t interested and he literally went into hiding. Second time in a row he has pulled out.

“Second time in a row I’m going to step up and take on a new opponent on short notice. AUG 6. MSG.”