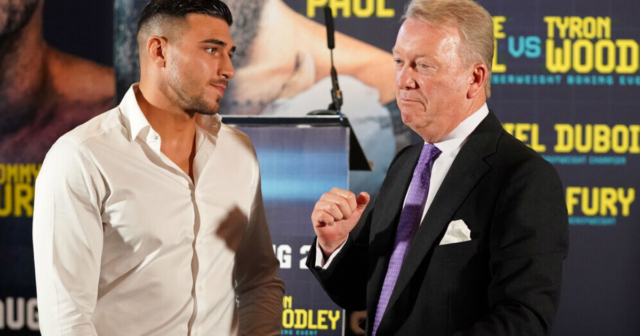 The pair signed for a second time to meet in a celebrity grudge match, this time on August 6 at New York’s Madison Square Garden.

But the fight was thrown into doubt when Fury revealed he was banned from travelling to America for a press conference.

Paul has since given his rival until TOMORROW to sort out his visa issue or else a new opponent will be found – with three already lined up.

But Fury’s promoter Warren said on Sunday that no appointment with the US embassy had been made.

He told iFLTV: “He has got to get to the Embassy, but no appointment has been made yet. I can understand where they’re coming from.

“They’ve got a show to run or whatever and if we can’t get it sorted out then obviously they’ll go to another opponent so we’ll just keep working on it and trying to make it happen.”

The fight collapse threatens to be a repeat of last December, when Fury, 23, withdrew following a broken rib injury.

That forced Paul, 25, to knock out replacement Tyron Woodley, 40, the ex-UFC champion he beat on points four months beforehand.

Fury would have been Paul’s first opponent with a recognised boxing record.

But the American has been forced to go back to the drawing board and again source a late-notice substitute.

Paul tweeted: “Tommy is officially out by Wednesday morning if he doesn’t go to the embassy / come out of hiding.

Advertisement. Scroll to continue reading.
Jake Paul has threatened to find a new opponent for August 6
In this article:frankwarren, jakepaul, stilltrying