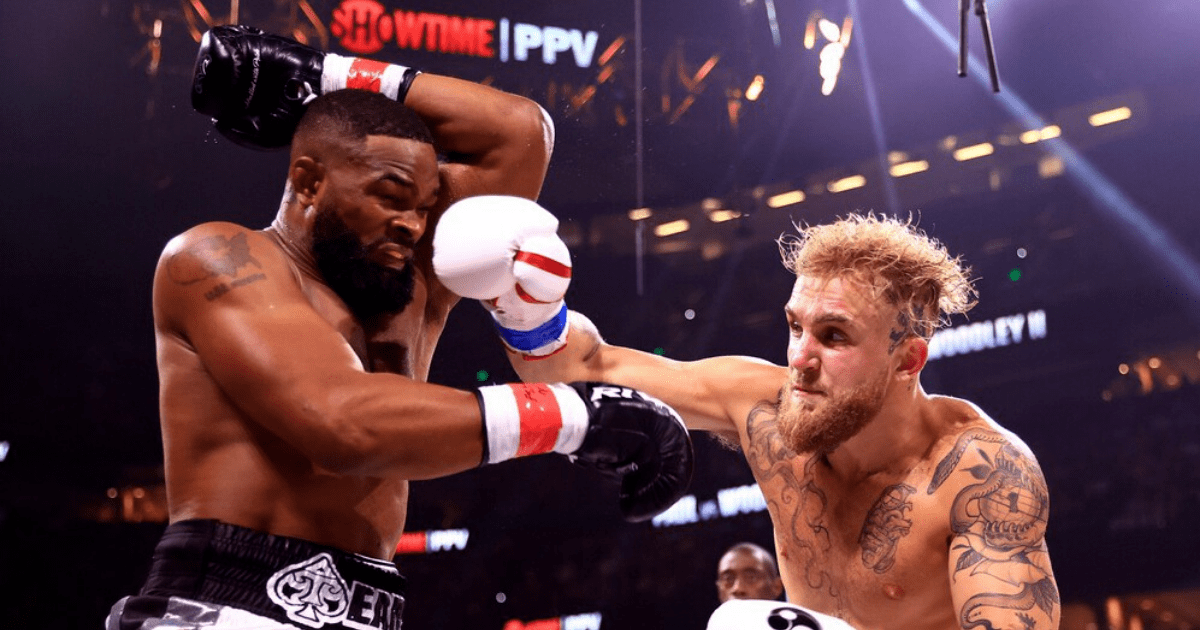 UFC legend Tyron Woodley has leaked his fight contract with YouTube star-turned-boxer KSI and accused the Brit of trying to weight-drain him.

KSI – real name JJ Olatunji – made his boxing comeback in August when he defeated Swarmz and professional boxer Luis Pineda.

Woodley (left) has leaked the fight contract with KSI

The two wins in one night had fans calling for a fight with Jake Paul, who is forging his own career in boxing.

And to step up his pursuit of Paul, it was confirmed KSI would return in January, with Paul’s former two-time opponent Woodley in pole position to accept a showdown.

Woodley demanded the paperwork be signed – but the fight now appears to be OFF.

The former UFC star went on a scathing rant on social media, accusing KSI of trying to weight-drain him, while also leaking the fight contract.

He first wrote: “Warned this b****! KSI, Why would you offer me a fight vs you then bail? Why would u send me a contract to b**** out and take a lesser opponent?

“Why would you have my name in your mouth for two years and not step up?

“Why do a poll of one million people, that all said fight me, and you run.”

Woodley continued: “When KSI blames it on Logan Paul and his injury or budget, I have two companies that will fund the purse. Try again. I’m done talking about it. My last post on it.”

In a leaked screenshot, the contract reads: “Maximum of 175lb at the official weigh-in on the day before the bout, and shall be a maximum of 185lb in the afternoon on the day of the fight.

“Promoter will use best endeavours to ensure the local commission administer this second weigh-in.

“If the boxer is overweight at either weigh-in, the promoter will be given the option to terminate the agreement and cancel the bout.”

A rehydration clause means that a fighter cannot gain more than a pre-agreed weight after the weigh-in and before the bout.

Woodley – who is considered one of the best 170lb fighters in UFC history – weighed in at 190lb mark for both of his defeats by Paul.

KSI is expected to announce a new opponent in the near future.

You can practice boxing by watching professional matches on TV, even if your partner is not available. Or you can find an amateur boxing club near you. Amateur boxing clubs often hold regular training sessions. These sessions typically include sparring partners that hit pads together.

You can also train boxing with punching bags. Before hitting the bag, ensure that you are wearing gloves and protective gear.

Boxing has been around since the dawn of time. Boxing is one of the most difficult sports you can play. You cannot just punch someone in his face and then knock him out. You must be able defend yourself from kicks and punches.

First, find a gym that offers boxing. After you have found a great place to train, you will need gloves and headgear. Gloves protect you hands while the helmet protects your head. You will also need shorts and a shirt.

Once you have all your equipment, you need to heat up. Start slowly and work your way up gradually to full speed. If you feel ready, get on the bag and start sparring with another boxer. If you fail, don’t be discouraged. Don’t worry if you miss. Just keep trying until it works.

Learning boxing will help you improve your self-confidence and physical fitness. Boxing is a popular sport. It requires speed, agility and strength.

It’s a great way for you to feel fit and healthy. You will find that the activity is enjoyable and you want to continue doing it.

There are many options for boxing training. You can choose to train in a gym or at home. Others require that you go to a health club. Online courses allow you to learn from anywhere in the globe.

It is important to consider whether you would prefer a beginner’s or an advanced course. Beginner’s classes usually teach basic techniques, such as sparring, mittwork, shadowboxing, and punching. Advanced programs cover more complex movements and offer more variety.