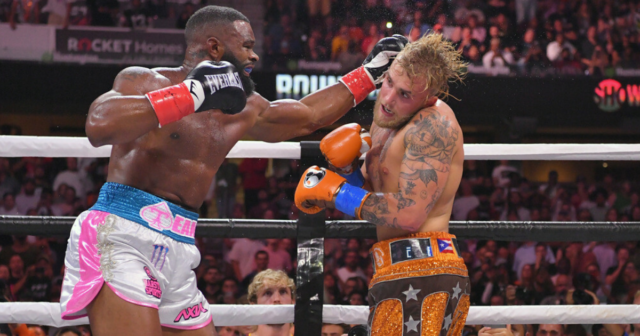 TYRON WOODLEY is refusing to get an ‘I love Jake Paul’ tattoo until he has ‘paperwork’ for a rematch with the YouTuber.

Before Woodley faced Paul over eight rounds, they agreed the loser would have the winner’s name inked on them.

After the ex-UFC champion was beaten on points, he immediately called for a rematch in the ring which was accepted, so long as the tatoo wager was fufilled.

As a result, Woodley is now awaiting a contract for a second fight with Paul before going ahead with the tatoo.

He said on Instagram Live:“That tattoo situation, the original bet was the loser gets the tattoo.

“In the ring, a new bet was presented that, in my opinion, superseded the previous bet.

“That bet said if you get the tattoo then we can run it back. We both said ‘Bet’ and we shook hands.

“So that’s a bet I’m trying to facilitate and the rematch has to happen. If we get the paperwork, of course.

“You motherf***ers have some dumbass tattoos on your bodies. Hella-dumb.

“For a nice bag, there’s nobody on this live that would tell me they would never do that.”

Paul, 24, moved to 4-0 in his poloarising boxing career after what proved to be his biggest win to date.

Britain’s Tommy Fury, 22, brother to world champion Tyson and star of Love Island in 2019, is the social media star’s preferred next opponent.

Fury beat Paul’s sparring partner on his undercard to build towards a fight of their own.

But Woodley, 39, is still holding out for a rematch and remains confident there can be up to three fights.

He said: “It’s all part of the story. This wouldn’t have been a trilogy.

“I’m gonna f*** him up and then his pride’s gonna kick in and we’re gonna do it again and it’s gonna literally be a whole movie that people talk about for a very long time.”

Advertisement. Scroll to continue reading.
In this article:hehas, jakepaul, tyronwoodley