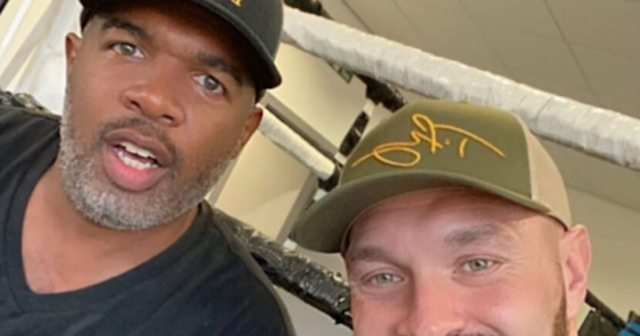 Joshua was beaten by Usyk in September and has been trailing trainers in America to add to his team ahead of their rematch.

Fury then offered his services alongside his cornerman SugarHill – nephew to the legendary Emanuel.

And according to SugarHill, the offer was genuine as the Gypsy King is desperate for Joshua to get back on track – so that they can fight.

He told talkSPORT: “We are 100 per cent serious about helping Joshua in camp.

“We want him to defeat Usyk, for a start, because we want to see Fury against Joshua, and so do all the fans of boxing in the world

“It is not a ruse or a joke, we would happily help Joshua because he is capable of beating Usyk in the rematch, and this is nothing new.

“In the old days, all boxers travelled to different gyms for assistance. This is a sport, and we have to think of it as a sport.

“The biggest fight in the sport is Fury versus Joshua, and we all know what that would do for the sport with the two of them fighting for the undisputed crown.

“It couldn’t be bigger.”

Fury, 33, was all-but confirmed to fight Joshua, 32, for the undisputed heavyweight crown in August.

But his attempt to walk away from a contracted trilogy bout with Deontay Wilder, 36, proved unsuccessful.

Fury later went on to knock Wilder out after 11 thrilling rounds in Las Vegas, just weeks before AJ was stunned against Usyk, 34.

Joshua has now invoked his right to an immediate rematch next year, while Fury looks set to face WBC mandatory challenger Dillian Whyte, 33.