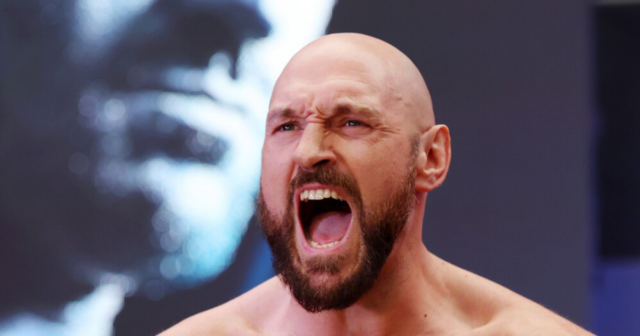 TYSON FURY’S promoters are in talks with Oleksandr Usyk’s team ahead of a potential unification fight later this year.

Usyk, 35, is set to face Anthony Joshua on August 20 in their much-anticipated rematch.

Tyson Fury is eyeing up his next fight

Should the Ukrainian beat AJ again, he could be set for a lucrative next bout with all the heavyweight belts on the line.

But his US promoter Bob Arum has admitted that talks for the Gypsy King’s next bout are already underway.

Speaking to Barbershop Conversations, the veteran of the fight game said: “I would hope to do that fight in December maybe, or early next year.”

Fury, 33, has eyed up a number of opponents since “retiring” earlier this year.

He was at first strongly linked with a crossover bout with UFC heavyweight champion Francis Ngannou.

With the Cameroonian crocked a date has failed to materialise, with other options considered.

SunSport revealed that Fury is eyeing up an exhibition bout with Game of Thrones strongman Hafthor Bjornsson, or even a bizarre trilogy fight with Derek Chisora.

Matchroom promoter Eddie Hearn reckons that Joshua remains the biggest draw in boxing ahead of Fury.

But he has admitted that the Gypsy King is currently the best heavyweight on the planet.

Fury recently roared a defiant message towards his boxing rivals.

The WBC champ then added: “I’m the f***ing boss. Heavyweights – I own those motherf***ers.”