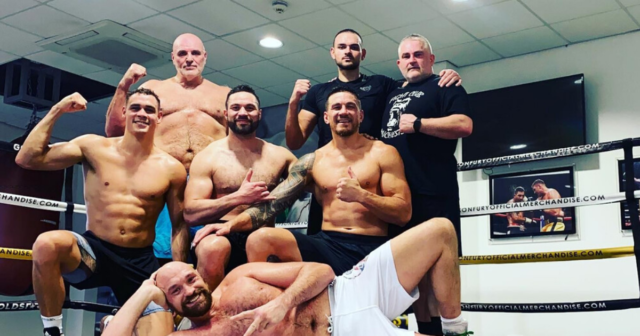 TYSON FURY is looking in great shape as he posed topless for a photo alongside dad John and former heavyweight world champion Joseph Parker.

The Gypsy King is set to defend his WBC title for the second time in the coming months against either Dillian Whyte or Oleksandr Usyk.

And he looks fighting fit as shown by a snap he posted on Instagram following a workout session.

But while he was all smiles in the ring alongside his dad and pals, the unbeaten Mancunian is a frustrated figure out of it.

Purse bids for his mandatory defence against the Body Snatcher have been pushed for a fourth time.

A WBC statement said: “The World Boxing Council has received once again requests from the teams of Tyson Fury and Dillian Whyte, to extend the period of free negotiations.

“The WBC has granted this final extension and If there is no agreement, a purse bid will be held this coming Friday, January 28.”

Fury had hoped to face WBA, WBO and IBF champ Oleksandr Usyk with the pair in talks for an undisputed clash in the Middle East.

Though for that blockbuster to go ahead, Whyte and Anthony Joshua, who is contracted to an immediate rematch against Usyk, would have to accept step-aside money.

Part of the plan would have to include AJ getting first crack at all four of the belts – after the potential Saudi Arabia clash – but Whyte is the WBC’s long-waiting mandatory challenger and would not accept that lightly.

Matchroom promoter Eddie Hearn has revealed he has received an offer for his two fighters, though stated no agreement has been reached for Fury to face Usyk.

He told DAZN Boxing: “There has been an offer, there’s been several discussions with myself. I can’t rule it out, it’s not my job. AJ’s the boss – he will rule it out or not rule it out.

“He’s very smart about the plan. He won’t want to do it. Sometimes you have to think with your head. There is a smart play here somewhere but Anthony is not about the money.

“If the plan makes sense from a development point of view – working with a new trainer, maybe having a fight first, going into a much bigger fight – yeah, I can see the sense in it.

“But with Anthony it’s never been a case of, ‘Here’s some money, does it tempt you?’ Because he’s not about that, he’s a throwback fighter, he’s about legacy.

“All he’s thinking about at the moment is beating Oleksandr Usyk.”

Following the WBC’s statement regarding purse bids, Fury hit out at Joshua and Hearn for blowing a £66million super-fight opportunity.

He said: “I had to do this video, Eddie Hearn and Anthony Joshua have to be the worst two damn businessmen in history. Today they lost 90 million dollars, god damn sons of b******.”