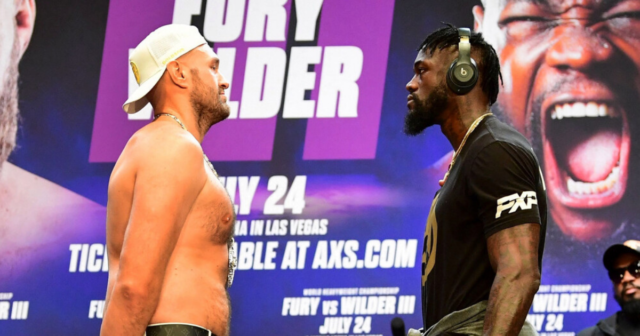 TYSON FURY has once again taken aim at ‘bully Deontay Wilder after having his coronavirus-related fight drop out questioned.

The pair’s heavyweight trilogy battle was delayed from July 24 to October 9.

But Fury’s diagnosis has been called a ‘lie’ by Wilder, amid a growing war of words between the boxers.

And the Gypsy King fired back on Friday evening with a fresh tirade against the American.

Fury, 32, tweeted a picture of Wilder with the phrase: “This man is a real piece of work.

Fury beat Wilder, 35, in seven rounds in their rematch last year after a draw opened their rivalry two-and-a-half years ago.

And the Brit previously bust the eardrum of Malik Scott, the Bronze Bomber’s coach, in a sparring session several years ago.

The trainer, 40, has joined in the feud by siding with allegations that Fury had delayed the fight because he was struggling in sparring.

During an appearance on The PBC podcast, Scott said: “Those so-called ‘rumours’ came from legitimate sources.

How Tyson Fury and Deontay Wilder stack up ahead of the trilogy fight
Advertisement. Scroll to continue reading.

Wilder is out to reclaim WBC belt when the pair meet in Las Vegas, having also claimed that Fury was not suffering from coronavirus.

“Oct 9th can not come any faster. #BombZquad #TilThisDay #ThisWillBeEasy.”