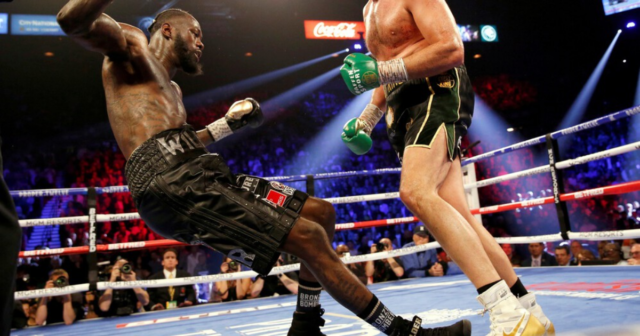 The heavyweight rivals will share the ring for the third time next Saturday in Las Vegas.

It comes three years after they drew in 2018 before their 2020 rematch ended in a round seven whitewash for Fury.

The contracted trilogy bout was then delayed due to the coronavirus pandemic and the Gypsy King’s plans to instead fight Anthony Joshua, 31.

But at the 11th hour he was ordered to face Wilder, 35, once more, and Joshua’s promoter Hearn senses the WBC champion, 33, is not up for it like before.

“I still think he’ll win comfortably, but it does throw in the likelihood of a mistake happening.

“If you make a mistake against Deontay Wilder, it could cost you the fight. He’s very dangerous.

“I don’t see him [Fury] losing a round, but it doesn’t really matter. One mistake, and it can be over.

“I genuinely hope he wins because I want the WBC to order the mandatory of Fury – Whyte.”

But British fans will be unable to fly to Las Vegas again due to Covid-19 travel restrictions.

And due to the nature of Fury’s one-sided win last year, Hearn fears the demand for the fight is at an all-time low.

He said: “Look at Fury-Wilder; they’re giving away tickets. They’re reducing prices, and that’s one of the biggest fights out there, really.

“It won’t do a five million dollar gate. Because mainly there are no Brits traveling. So in America, that fight is not a big fight.”

“There’s zero buzz for that fight because he [Fury] absolutely destroyed him [Wilder] in the second fight. And he beat him in the first fight as well.

“The second fight looked like a mismatch. I just don’t see it doing the numbers.

“Someone is going to have egg on their face. I don’t know what the deal is, but it ain’t going to look pretty when the balance sheet hits.”

Advertisement. Scroll to continue reading.
In this article:deontaywilder, threeyears, tysonfury