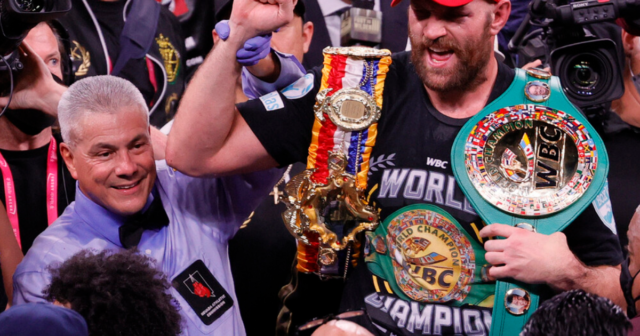 Whyte is the mandatory challenger for Fury’s WBC and The Ring magazine titles.

Fury saw off rival Wilder with an emphatic knockoutWhyte is set to fight Fury, with the fight due to be ordered next week

And according to Michael Benson, the WBC gave Fury 30 days after his trilogy fight with Deontay Wilder to try and set up a unification blockbuster with WBA, IBF, WBO and IBO champion Oleksandr Usyk.

The deadline has since passed and they’re set to officially order Fury to fight Whyte.

TalkSPORT’s Benson said on Twitter: “The WBC gave Tyson Fury 30 days after the Deontay Wilder win to agree a fight with Oleksandr Usyk, or he’d have to defend against Dillian Whyte next.

“This deadline has now passed. WBC will address all mandatories on Tuesday, with Fury vs Whyte expected to be officially ordered.”

Whyte, 33, had been set to fight Otto Wallin at the end of last month in a fight which would have played a factor in who fought Fury next.

But the Brit reportedly suffered an injury during his training camp in Portugal.

And the Body Snatcher got to skip past Wallin because of it.

Addressing claims that the timing of his injury was ‘convenient’, Whyte said: “We need to put some respect on my name. Listen, I’ll fight anyone; I don’t care.

“I’m always willing to go and ready to fight, but my injury, I tried to make the fight.”