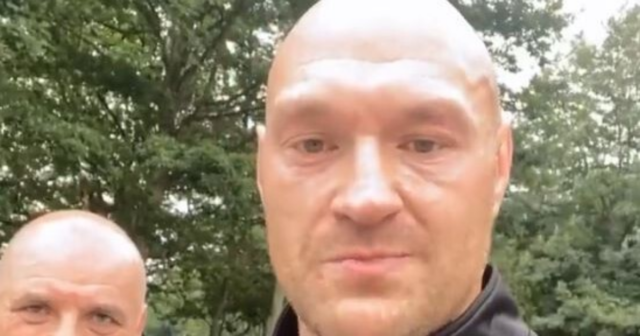 TYSON FURY provided fans with a positive update on his newborn daughter Athena, who he hopes will be out of hospital on Wednesday.

The heavyweight revealed his daughter was in intensive care since he and wife Paris welcomed their sixth child into the world on August 8.

But now Fury hopes to bring home his daughter in just two days time, before he can then start training for ‘big dosser’ Deontay Wilder.

He said on Twitter: “Four mile run there with my dad in the park here in Liverpool.

“Hope to God that the baby gets out of the hospital on Wednesday and I can start training for the big dosser Deontay Wilder which gives me about seven and a half weeks, which is plenty of time for a mug like that.”

The Fury family have set up a GoFundMe page for the Alder Hey Family House Trust, raising £36,375 towards a £50k target to date.

Over the weekend new mum Paris, 31, shared footage of her by Athena’s bed side as she slept peacefully.

Her post comes just two days after Tyson, 33, revealed his newborn is in a ‘stable’ condition – but remained in the intensive care unit.

He wrote on his Instagram story: “Update for everyone. Baby Athena is well and has had a stable day off [the] ventilator.

“Thanks to everyone for the prayers, still in the ICU for now. Thanks to all the Drs and nurses. God bless you all.”

WBC champion Fury opened up about the difficult period as he exercised to take his mind off things.

He said: “After a very stressful week I’m back on the road doing a bit.

“I find that it calms me down, relaxes my mental health, anxiety. Without this bit of training I’d be cuckoo right now.”

Fury is due to fight American rival Wilder, 35, on October 9 but has understandably put training on hold.

But having returned to the UK from the US, the undefeated British star is now back under the guidance of his dad John.