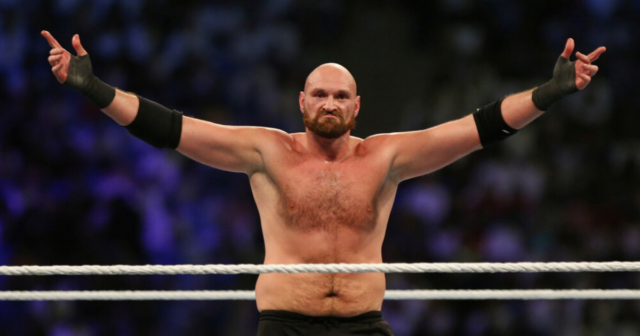 TYSON FURY is reportedly in discussions over a possible return to the WWE.

The Gypsy King, 33, made his wrestling debut back in 2019 when he faced Braun Strowman at the pay-per-view event Crown Jewel in Saudi Arabia.

The heavyweight boxer defeated Strowman in the Middle East

He then returned to boxing four months later and stopped Deontay Wilder to claim the WBC heavyweight title.

Fury would go on to beat Wilder again in October 2021, before defending his belt for a second time in April as he brutally knocked out Dillian Whyte at Wembley Stadium.

After the win over Whyte, Fury reiterated his claims before the bout that he was retiring from boxing.

He recently insisted it would take £500million to force him back into the boxing ring out, despite many wanting him to face the winner of the rematch between Oleksandr Usyk and Anthony Joshua.

Fury has been linked with an exhibition clash against the likes of UFC champion Francis Ngannou and Thor – real name Hafthor Bjornsson.

But according to GiveMeSport, the world heavyweight champion’s next in-ring action is in talks to take place in the WWE.

Fury stated earlier this year that he planned to return to wrestling in both July and September.

But the report now states that with his other commitments away from the ring – most notably a meet and greet tour – it is more likely that his comeback would be at Clash at the Castle on September 3.

The event is scheduled to take place at The Principality Stadium in Cardiff – WWE’s first UK stadium show in 30 years.

However, there are no concrete plans to bring Fury back and even if he does it is unclear whether it would be to wrestle or simply as an in-ring appearance.

The undefeated boxer has exchanged trash talk with WWE superstar Drew McIntyre for some time.

But the Scottish wrestler is being linked with a clash against WWE Universal Champion Roman Reigns at Clash at the Castle – meaning Fury may need a different opponent.