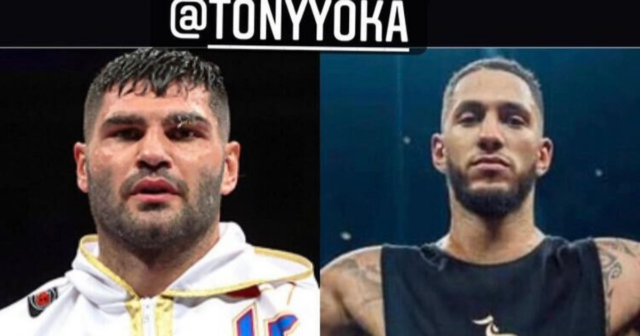 TYSON FURY named Filip Hrgovic vs Tony Yoka as the eliminator fight he wants to see next for the right to a shot at Oleksandr Usyk’s IBF world title.

The Gypsy King, 33, took to social media on Wednesday as he called on the promoters to get the match-up organised.

He wrote on his Instagram story: “Great fight guys, can’t wait for this fight,” followed by a series of popcorn emojis.

Fury, who is on course to fight Dillian Whyte next, is keeping a close eye on proceedings surrounding Usyk following his stunning win over Anthony Joshua last year.

That saw him claim AJ’s WBA, WBO and IBF belts and wreck any hopes of a bumper Fury vs Joshua British showdown.

And if Usyk beats Joshua in April, with another fight set for the UK, it could finally give Fury the chance to unify the heavyweight division.

However, the Ukrainian will at some point need to face his mandatory challengers.

And that is why Fury highlighted the potential bust-up between Hrgovic and Yoka – which would keep the two dangerous heavyweights out of his path for the time being.

Hrgovic, 29, is ranked as the No2 IBF heavyweight behind Charles Martin and has a perfect 14-0 pro boxing record.

But Martin lost to Luis Ortiz on New Year’s Day, who in turn injured his hand while Joseph Parker is understood to have ducked a fight with Hrgovic because it did not pay enough.

Joshua is No4 on the IBF list but will not need to go through an eliminator to get his shot at revenge.

Hrgovic’s promoters insist they have made contact with the 11-0 nicknamed Artist – but have got nothing back.

Hrgovic reiterated to Yoka: “Sign the contract, make the fight. Now you have your chance. What are you going to do?”

Frenchman Yoka, 29, was due to face Martin Bakole this month but that fight had to be delayed due to Covid and could be rearranged for March.

To make matters more complicated, the IBF have told Hrgovic and Yoka they have until 10pm on Thursday to get a deal done.

Yoka beat Croatian Hrgovic at the 2016 Rio Olympics and went on to beat Joe Joyce to win gold while Hrgovic claimed bronze.

Should the pair fail to sort out a professional rematch, Joyce would be next on the list but, as the No1 for the WBO, would likely go down that route.

And that would make Agit Kabayel the next in line for Hrgovic, who is understandably desperate to get an eliminator sorted and give him a chance at a world title.