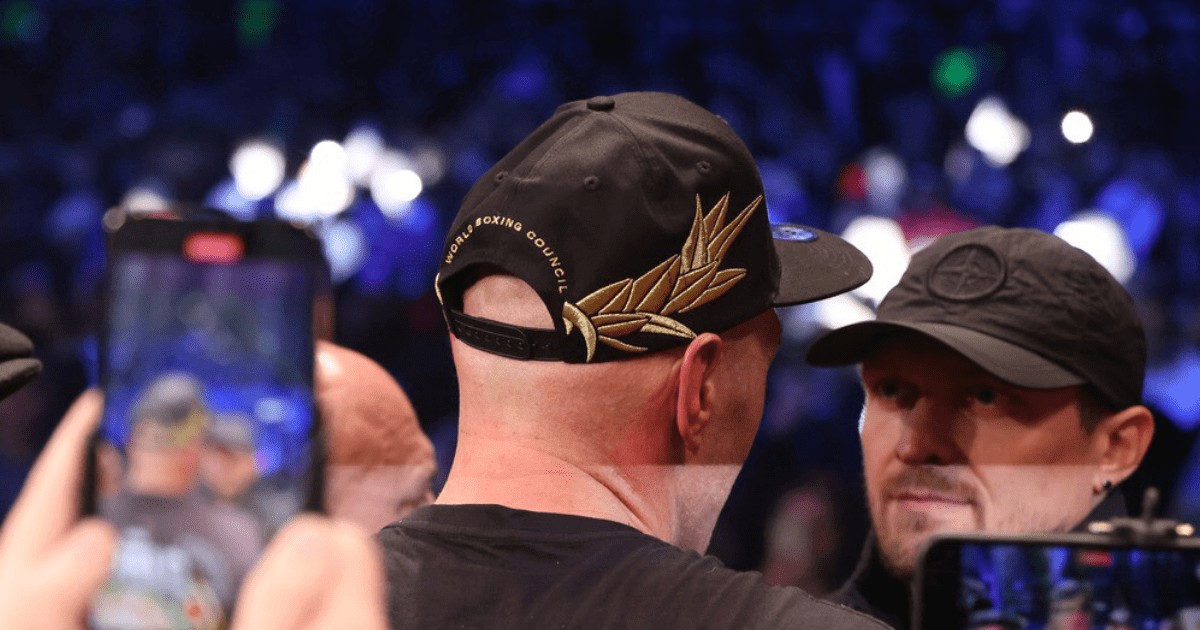 TYSON FURY is close to agreeing to a unification fight with Oleksandr Usyk.

The claim has come from the Ukrainian fighter‘s manager Egis Klimas who has revealed that a fight could potentially happen in Saudi Arabia in February next year.

Usyk is the current holder of the WBA, WBO, IBF and The Ring magazine belts while Fury holds the WBC title.

This means the winner of the fight would be the undisputed heavyweight world champion.

The mouth-watering match-up has been called for since Fury came out of his brief retirement and a fight against Anthony Joshua could not be organised.

Klimas has also said that he was on a call with Fury’s promoter Frank Warren and that talks were going well.

He said: “We are almost done.

“There is not much to talk, two heavyweights, the undisputed heavyweight championship bout, that’s what people need… Most likely, we are aiming for Saudi.”

Afterwards, Warren said: “There are no obstacles in the way of making the fight.”

And Fury added: “I think he’s willing. He looks willing.

“I would like to think there’s not a man born who could beat me in my own era, but you can never underestimate anybody.”

Both of the fighters have impressive records, with the Gypsy King winning 33 of his fights and Usyk winning 20 times.

Fury won his recent fight against Derek Chisora on Saturday with a dominant performance.

Warren has already predicted that Fury will win the fight between the two.

He told Queensbury Promotions: “I think Tyson will stop him. I think he’s too big, much too big for him.

“I think they’re quite similar and have good boxing brains, but I just think Tyson, everything he’s got, he’s got better than Usyk.

“Usyk is a really good, he’s a great cruiserweight, and he’s been a good heavyweight.

“Looking at the two of them, Tyson, in every box that you tick, he’s better.”

You can learn how to box. You just need to find a boxing gym near you and join a class. Most gyms offer free classes, but if you don’t see one nearby, you can always look up local boxing clubs on Google.

Also, you will need equipment such as gloves, mouthpiece, headgear, sparring partners, and headgear. Once you have the necessary equipment, you are ready to practice your punches or kicks.

Boxing is one of the oldest sports known to man. Boxing was developed in ancient times to train warriors for fighting against foes. Today, boxing is still widely practiced around the world. You don’t even need to go to a gym to box. You only need a pair of gloves and some punching bags.

There are many local amateur boxing groups that you can join to train with professionals. When you are proficient in basic punches and combinations you will be ready to compete at tournaments.

Boxing trainers train for at most 4 hours per day. They learn new moves and practice their punches. Boxers sometimes spar 10 times per semaine.

Boxing is the most loved sport in the world. Two opponents fight each other to the death. The rules of boxing vary from country to country. There are three types: Amateur, Professional, or Olympic boxing.

Amateur boxing is usually practiced at school, college or university. This type includes sparring sessions using padded gloves, but without protection. Amateur boxing competitions typically last for three rounds, each lasting five minutes. There are many styles of amateur boxing such as Kickboxing or Muay Thai, Taekwondo and Karate, Judo and Wrestling, among others.

Boxing is typically practiced in clubs, stadiums or gyms. They are equipped with protective equipment including a mouthpiece and nose guard, shinguards as well as elbow pads, knee pads. Waist belts and groin protectors. Professional boxing competitions include six rounds of four minutes each. There are many styles to professional boxing.

Olympic boxing is performed at the Olympics. International standards require that boxers use special protective gear. The competition lasts approximately three minutes for each round. Only two types of Olympic boxing are available: Light Flyweight or Heavyweight.

There are seven types: Left Hook (right hook), Right Hook (uppercut), Cross (cross), Straight, Overhand, Underhand. Each punch has its own technique. Some punches require greater strength than others. An example of this is an uppercut, which requires tremendous force. A straight punch, on the other hand requires less power and is quicker than other punches.

There are many combinations that can be used to punch. These are combinations of punches which work together to achieve a goal. A combination can contain multiple parts. An example of this is a left hook, followed by a right crossing. This will damage the opponent’s jaw.

To defend against kicks, a boxer should use his legs. After receiving a kick, he will raise his leg and move away from the attacker. To avoid being kicked on the sides, he bends at his knees when the attacker strikes from the front. He will block the kick with his foot if the attack is coming from behind.

Because they cause great pain, elbow strikes are extremely effective. You can deliver an elbow strike directly or indirectly. Directly, you strike your opponent with your forearm. Indirectly, you hit him with another portion of your arm.

Boxers should respond to being attacked by their opponent by standing back and delivering counter-attacks. This will help him gain distance from his opponent. A boxer must also maintain his balance when responding to an opponent’s counter-attack.

To box effectively, a boxer must establish a stance. The way he defends himself will be determined by his stance. It dictates how he places his body and faces his opponent. There are many positions that boxers can adopt. These are the most popular:

In order to win a fight, a boxer must move around his opponent. This involves changing position, speed and rhythm.

Advertisement. Scroll to continue reading.
In this article:oleksandrusyk, saudiarabia, tysonfury