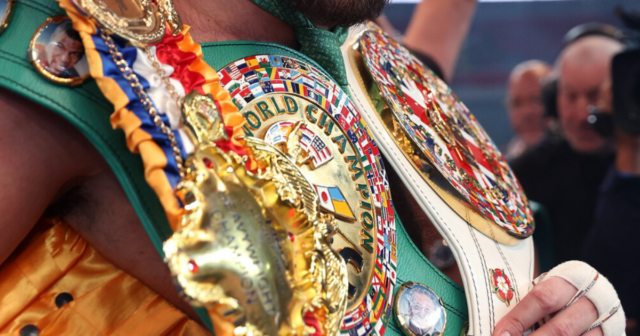 The Gypsy King seems to be serious this time as he revealed what is next on the horizon.

He told Ring Magazine: “I’ve done well out of boxing. The world is open to so many things now. I’m doing a Netflix documentary at the moment.

“I’m going to be recording an album soon. Who knows, you might even see me on the silver screen.”

And the world champ recently told Gareth A Davies: “Yeah, I might do a little bit with Ed Sheeran, or Adele.”

The Wythenshawe warrior did record a Christmas song with Robbie Williams in 2019.

The pair recorded a track called ‘Bad Sharon’, with the Fury’s part being recorded from his own living room.

He also partnered with Don McLean for a modern rendition of American Pie – 50 years after the song’s release.

The duet was then shown live at Wembley ahead of his famous victory against Dillian Whyte in front of 94,000 fans.

The Brit also sang American Pie when he reclaimed the world title by beating Wilder in 2020.

However, on Friday, Fury announced that he’d decided against the plan to a sensational return to the ring.

And the fighter backed up his words as he relinquished the prestigious Ring heavyweight strap.

Fury’s intentions for the WBC heavyweight title remain unclear, although he has held talks with the Mexican sanctioning body’s president Mauricio Sulaiman.

Sulaiman said: “Just finished a touching video conference with Tyson Fury who has confirmed his official retirement from boxing.

“We fully support his decision which is a dream for anyone to retire undefeated and as WBC champion of the world. WBC boxing will prepare a special farewell event soon.”