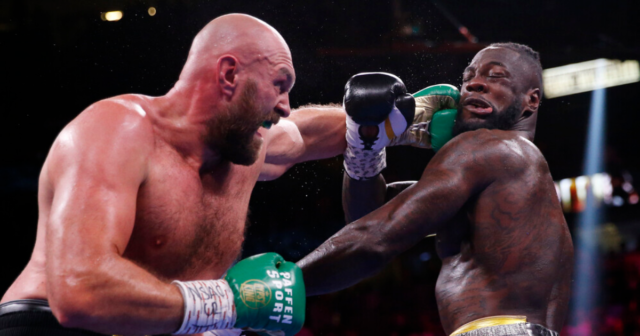 TYSON FURY should come back to the UK and fight Dillian Whyte.

That’s according to former British champ David Price, who also believes Anthony Joshua would knock out Deontay Wilder if they end up meeting next year.

He had been hoping to fight Joshua in an all-British, world heavyweight unifier.

But AJ lost his belts to Oleksandr Usyk last month and has already triggered his rematch clause – with that fight likely taking place in March.

Fury will now consider his options after becoming king of the ring.

But Price believes the Gypsy King should take on mandatory WBC challenger Whyte in front of a bumper UK crowd.

He told talkSPORT: “The Joshua fight was going to be a mega fight, but I wouldn’t rule out or write off the Dillian Whyte fight for a couple of reasons.

“Number one, Dillian Whyte would be a worthy opponent because of the position he has got himself in. The knockout loss to [Alexander] Povektin, he got straight back in, put it right the best way possible.

“Apart from that, he has had other good wins while he was the mandatory contender. He’s not been treading water, he’s got in with big names, potential banana skins and come through them.

“I think the other reason is that Tyson Fury deserves a good homecoming fight and where better to do it than a domestic opponent who also has a name in his own right?

“I think it is the one that makes sense because everyone else is tied up for the time being and, obviously, Fury is going to need a bit of time out after that fight.

“Maybe in spring or summer, somebody can put him and Whyte in a stadium, I think that is the homecoming that he deserves.”

Price also believes Joshua should look to fight Wilder next, should he lose his rematch against Usyk.

Price added: “This is the thing with these fights in the heavyweight division. Styles make fights.

“I always thought Joshua would knock Wilder out personally, with his close-range, mid-range punching power and explosiveness because Deontay Wilder is only dangerous at long range.

“That’s why Tyson Fury was getting up close to him, bullying him against the ropes and mauling him. Wilder is really dangerous at long range – if you get past that range, then you can knock him out.

“That being said, I’ve seen Wilder ship a load of punishment to Fury over a sustained period which shows how tough he is.

“That’s a great fight as well and there are other opportunities as well for fans because there are going to capture the imagination.”