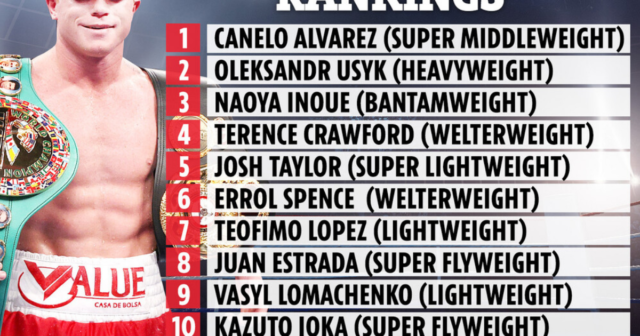 TYSON FURY has been snubbed from the Ring Magazine’s pound-for-pound rankings despite his epic win over Deontay Wilder.

‘Gypsy King’ Fury took down Wilder for the second time in their epic trilogy fight in Las Vegas last weekend.

But that wasn’t enough for the 33-year-old WBC champion to enter the top ten on the Ring Magazine’s list.

The only heavyweight to feature is Oleksandr Usyk, who comes in at No 2 after his dismantling of Anthony Joshua last month.

The Ukrainian wrestled the WBA, IBF and WBO belts from AJ with his unanimous points victory at Tottenham Hotspur Stadium.

That victory put the former cruiserweight king and now heavyweight champ behind only Canelo Alvarez on the P4P rankings.

Fury might have to beat Usyk in a mega unification bout before he gets his place in the top ten.

Canelo, meanwhile, is back in the ring next month against Caleb Plant at the MGM Grand in Las Vegas.

The Mexican star, 31, has beaten Avni Yildirim and Billy Joe Saunders this year and is widely regarded as the best boxer on the planet.

No Brits make the P4P list, but four are in Ring Magazine’s top 11 for just heavyweights.

East European hero Usyk is second in those ratings, with Wilder fourth.

And Fury’s dad John wants his son to take on Usyk next – after saying the Gypsy King had “bigger fish to fry that Whyte”.

Fury Senior told Sky Sports: “If Tyson was out on a regular basis and sharpens his tools properly and gets that ring rust out of the way, nobody can touch Tyson.

“What’s to stop him from being undisputed, some blown-up cruiserweight from Ukraine?”