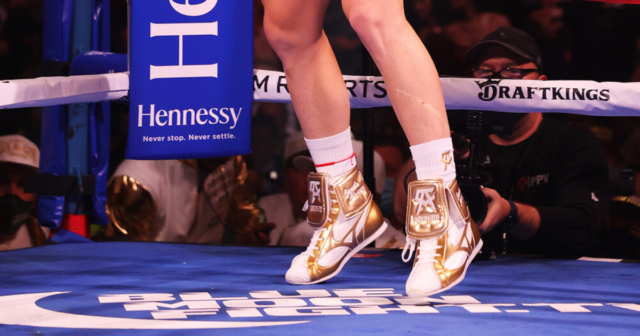 CANELO ALVAREZ has been tipped to become heavyweight world champion should he decide to pile on the pounds – but would he be able to topple Tyson Fury?

The 31-year-old has won world titles in four weight classes from light-middleweight to light-heavyweight.

The governing body gave the green light for the dust-up to take place in 2022, with the winner of Makabu and challenger Thabiso Mchunu to face Canelo next.

Eddie Hearn has stated Canelo could move up to heavyweight as he declared the Guadalajara native aims to make history.

Unified heavyweight champ Oleksandr Usyk, who holds the WBA, WBO and IBF belt, has opened the door to a match-up against Alvarez.

But a showdown against the much larger Gypsy King would likely prove to be a much tougher proposition for Canelo.

Canelo has recorded 39 knockouts from his 57 victories, compared to 22 KOs from his 32 fights.

Canelo weighed in at 12st last time out, which is a whopping 7st 11lbs less than Fury was for that showdown.

But it’s not only a huge weight advantage that Fury would enjoy over the Mexican.

And the Gypsy King is also a huge ONE FOOT bigger than his potential opponent.

There is no doubt that Canelo will go down as one of the all-time greats, but if he could overcome the huge physical difference by toppling the huge Fury then few would be able argue against him being the GOAT.

Did you miss our previous article…
https://www.sportingexcitement.com/boxing/logan-paul-suffers-from-withdrawal-symptoms-after-he-gives-up-smoking-weed-as-he-ends-2021-with-worst-week-of-the-year

In this article:beable, hasbeen, worldchampion