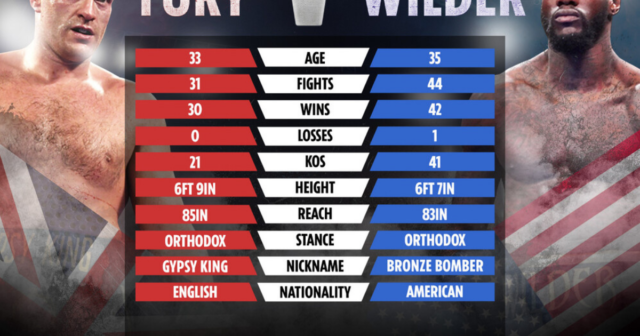 THE WAIT is finally over! Tyson Fury takes on Deontay Wilder in their huge trilogy fight this weekend.

Neither man has been in the ring since their last outing in February 2020, when Fury stopped the Bronze Bomber in seven thrilling rounds.

How the two stars compare ahead of their crunch third fight

After Wilder’s corner threw in the towel after a seven-round pummelling, the Bronze Bomber gave a whole host of excuses as to why he had lost.

“I feel great. I have a great team, everybody’s just on one accord. And when you have a team that’s on one accord it’s like the instructions come even clearer.

“And it’s like how can you go wrong when you have so many guys on the same page and looking for perfection.

FOLLOW ALL THE LATEST UPDATES AHEAD OF FURY VS WILDER HERE

“You’ll never be perfect but that don’t mean you can’t practice it and here we’re practising to make perfect so when I get in the ring won’t be no questions asked, won’t be going back to old habits and build right off what we’ve been working on in this camp.

“My hand will be raised high in the sky, and not because I whooped his ass in 12 rounds, but because I knocked him out.”

When is Fury vs Wilder 3?

What TV channel and live stream is Fury vs Wilder 3 on?

Tyson Fury vs Deontay Wilder 3 will be broadcast live on BT Sport Box Office for those in the UK.

BT will begin their coverage of the event from midnight, and the PPV offering will set you back £24.95.

How to purchase Fury vs Wilder 3

The Gypsy King Tyson Fury heads into the fight the favourite

How can I listen to Fury vs Wilder 3?

Unbeaten Fury goes into the fight as the favourite with odds of 1/3.

You can get 9/4 on dangerous Wilder to avenge his only loss.

And a draw – which was the result of their first fight remember – is currently set at 25/1.

(Odds via Betfair at the time of publication) 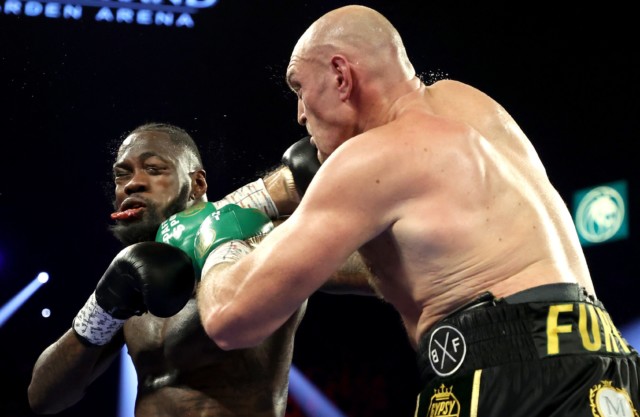 What is the undercard?

Robert Helenius vs Adam Kownacki is the co-main event before the headline act of Fury vs Wilder.

Helenius, 33, is known on these shores for his controversial split decision win over Derek Chisora in December 2011. He has also defeated Michael Sprott but lost to Dillian Whyte.