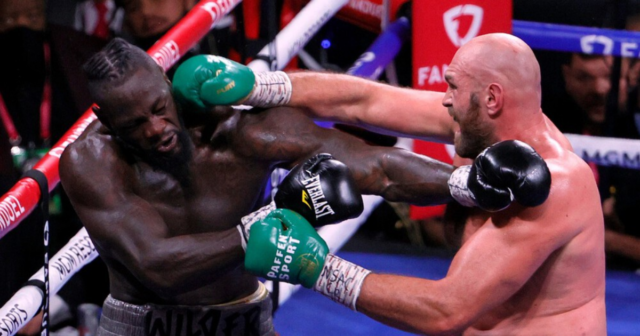 TYSON FURY and Deontay Wilder both passed drugs tests after the third instalment of their sensational trilogy.

The Gypsy King was twice sent to the canvas by Wilder, before recovering to produce a sensational 11th round knockout.

Both men contributed to what was an instant classic in Las Vegas.

And the duo both did so cleanly.

The Voluntary Anti-Doping Ageny (VADA) have confirmed that each of their samples came back clean.

After some bad blood down the years, the duo appear to have buried the hatchet and have both shown the other plenty of respect since their third showdown.

Wilder, 36, wrote on Instagram: “I’ve learned that sometimes you have to lose to win. Although, I wanted the win I enjoyed seeing the fans win even more.

“Have a fantastic day, Wilder. Thank you for the great fights we’ve had and the trilogy, and you’re a great, great fighter, an awesome fighter.

“I hope you have a fantastic day with you and your family. I hope God blesses you abundantly.

The WBC champion is set to take on Dillian Whyte next, after the Brit pulled out of his scheduled bout with Otto Wallin due to a shoulder injury.

Wilder, meanwhile, will be out of the ring for a while – having been handed a six-month medical suspension following his loss to Fury.

The American was already set for a lengthy absence, after trainer Malik Scott admitted that he wanted his fighter to take a prolonged break.

Advertisement. Scroll to continue reading.
In this article:deontaywilder, thethird, tysonfury