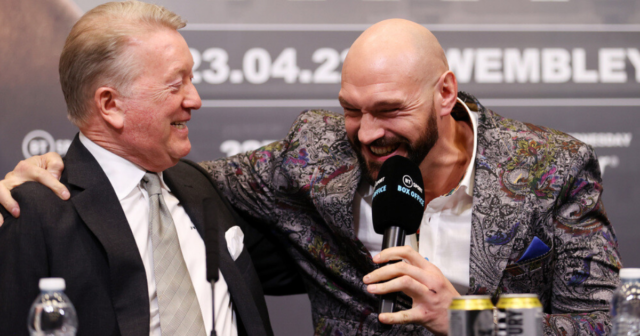 The big fight has high interest on both sides of the Atlantic, and promoter Frank Warren has confirmed the ring walk time for the WBC heavyweight title clash.

The Gypsy King has not fought in the UK since 2018, with his last five fights including his epic trilogy with Deontay Wilder all taking place in the US.

Fury, 33, said: “It’s been a rollercoaster of a ride. I’ve been across the ocean and now – after four years away – I get to come back to Wembley Stadium with almost 100,000 fans there.

“I am putting this on for those who travelled out to Las Vegas and the fans who stayed up until 5am to watch on BT Sport. Now they can come and watch on home soil and be a part of history.

“People will be talking about this event saying where were you when this happened on that night of April 23, 2022 in years to come. When Tyson Fury smashed this fella to pieces in front of home fans in the UK.

“There hasn’t been a bigger British heavyweight fight since Lennox Lewis against Frank Bruno. It could be over in round one or in round six but I don’t think it will go past that.”

What time is Tyson Fury vs Dillian Whyte?

Tyson Fury vs Dillian Whyte will take place at 10pm UK time – this is 5pm ET.

The timing has been confirmed by fight promoter Frank Warren.

Sky customers will also be able to purchase the event through the red button.

There are a host of exciting boxers on the undercard including Tyson Fury’s younger brother Tommy.

The undercard is as follows: