Tyson Fury vs Dillian Whyte tale of the tape: How two heavyweights compare with WBC set to announce fight
Advertisement 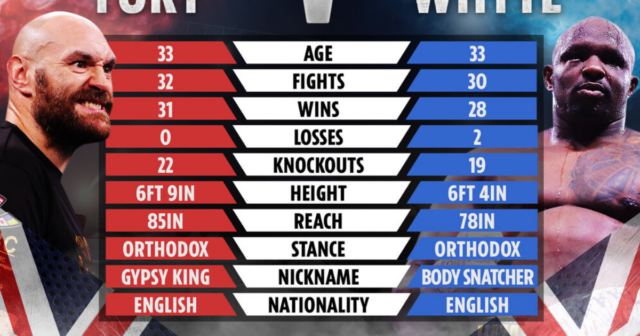 DILLIAN WHYTE looks to finally be getting his heavyweight world title shot.

But standing in the way of the Londoner getting his hands on that belt is the phenomenal Tyson Fury.

Promoter Eddie Hearn believes the WBC are likely to press the Gypsy King into defending that iconic green belt against the mandatory challenger.

And that is Whyte.

It’s not quite the ‘Battle Of Britain’ scrap that many boxing fans hoped for – but Anthony Joshua fluffed that chance when he lost to Oleksandr Usyk. That rematch has already been agreed.

Whyte was forced to pull out of his fight against Otto Wallin this weekend with a shoulder injury. But now Hearn thinks there is a much bigger prize around the corner.

Fury has tasted 31 victories in his 32 fights, with one draw and no losses.

Whyte, meanwhile, has won 28 of his 30 with two losses. They came against Joshua and a stunning shock KO loss to Alexander Povetkin.

The Bodysnatcher atoned for that defeat by winning the rematch and sending Povetkin into retirement.

But while Whyte is a hefty heavyweight, he is no match for the Gypsy King in this regard.

Fury is 6ft 9in with Whyte measuring 6ft 4in. And Fury’s 85in reach to Whyte’s 78in could mean a difficult night in store for the challenger.

Speaking about Whyte’s big chance, Hearn said: “That WBC fight, I think, will be called at the convention in about three weeks time.

“I don’t think the Fury fight will happen until February at the very earliest anyway so I don’t think it will be an issue for him.

“He wanted to fight and anyone that knows Dillian Whyte knows that he is not going to shirk out of a fight.” 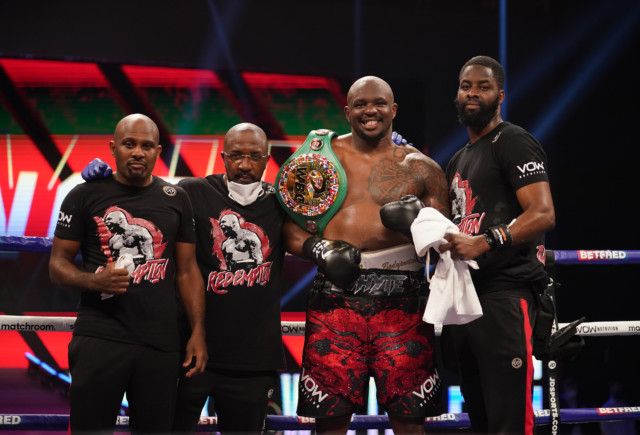 Dillian Whyte is the man that the WBC are expected to order the Gypsy King to defend against next
In this article:dillianwhyte, theway, worldtitle