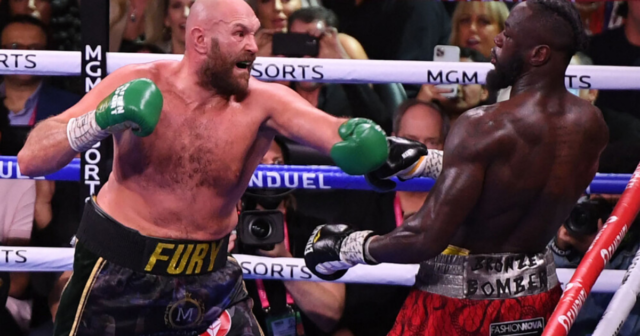 TYSON FURY will be back in the ring early next year but there is no word yet on who he will fight next.

The WBC heavyweight champion has been weighing up his options after his sensational knock-out victory over Deontay Wilder last month.

Former sparring partner Dillian Whyte has been mooted as a potential opponent but the Londoner is embroiled in legal wrangling over his mandatory challenger status.

And promoter Ben Shalom – who met Fury in the ring at his cousin Hosea Burton’s British championship fight on Saturday – revealed the champ’s current thinking.

Shalom told Sky Sports: “He told me he’ll definitely be fighting in February or March, but doesn’t know who to fight. It simply came to our notice then.

“But he wants to fight in February or March, whether it’s against Dillian or not. He’s firm about it.”

The news confirms what Fury promoter Frank Warren has been saying over his charge’s next move.

The Wythenshawe fighter is apparently without a mandatory challenger due to legal proceedings between Whyte and the WBC.

Whyte was expected to be mandated to fight the Gypsy King but will have to wait for the result of arbitration to find out if he’ll get his title shot.

Warren told TalkSPORT: “Due to the legal wranglings involving Dillian Whyte, Tyson does not have a mandatory call to answer and is free to proceed with a defence of his belt and it’s a fight I’d like to stage in the UK.

“Tyson’s made it very clear he wants to fight in late February/early March and that’s what we’re moving forward to do.

“Tyson just wants to keep active, he’s had just one fight in 22 months. Whatever happens with Dillian Whyte will take its course.”