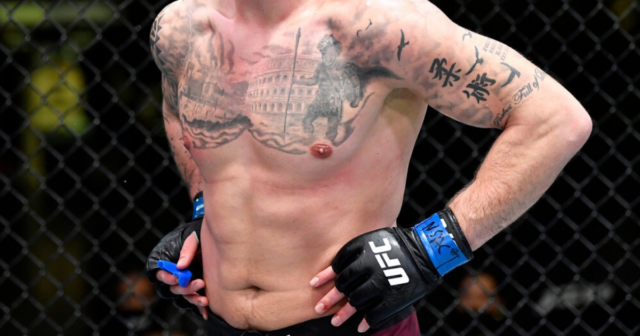 And Fury Sr reckons Aspinall can follow in the footsteps of his son by winning heavyweight world titles.

The 28-year-old is establishing a fine reputation for himself in MMA with 11 wins from 13 fights.

He made his UFC debut last year on Fight Island and remains unbeaten in the promotion, being taken beyond the first round just once.

Aspinall actually sparred with Fury ahead of his showdown with Wladimir Klitschko in 2015.

And then the Wigan warrior took a break from MMA in 2017 to make his pro boxing debut, beating Tamas Bajzath with a first-round knockout.

Fury Sr told Give Me Sport: “I’m telling you now, Tom Aspinall will do big things in the UFC, but he’ll also have a crossover bout and he’ll probably be the first MMA fighter to do mega things in boxing as well.

“Look at the mark he’s already making, he’s in the top ten now in the UFC, he’s only young still.

“And I think when he’s done there, he can be the first crossover to come from the MMA world to conventional boxing and win titles, and I said that first.

“Keep doing your thing Tom Aspinall, you’re great mate, I like you a lot.”

Fury Sr reckons Aspinall’s rapid hands, technical skills and 6ft 5ins frame are transferrable from the octagon to the ring.

The 57-year-old added: “He can actually box well, punches hard, and moves really well for a heavyweight.

“But he’s got bottle and guts to burn, and he’s a big strong lad. He’s willing to learn and improve his game.

Did you miss our previous article…
https://www.sportingexcitement.com/boxing/moises-fuentes-rushed-to-hospital-for-emergency-surgery-after-brutal-ko-left-him-unconscious-as-wbc-leads-prayers