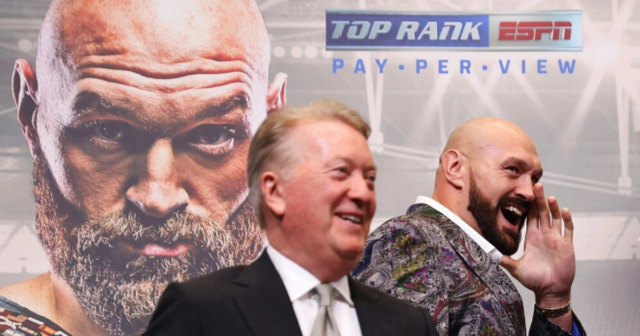 TYSON FURY has spoken with his promoter Frank Warren about fighting the winner of Anthony Joshua versus Oleksandr Usyk.

Fury has maintained ever since knocking out Dillian Whyte in April that he is retired.

But rumours persist that the WBC champion will consider a comeback to fight the winner of AJ’s rematch with Usyk.

Now Warren has spoken out to confirm talks with Fury over a potential undisputed title decider.

He told talkSPORT: “I think whoever wins it, in my heart but I might be wrong, but I think he will come back to fight the winner.

“I have [had those conversations]. I don’t want to get into it too much at the moment. Tyson is a fighting man, he loves fighting.

“He’s training continuously and at the end of the day, when you are training and training really hard you want a goal to train for.

“His goal would be to fight the winner… that’s my opinion.”

Fury, 33, at one point set a £500MILLION price tag to get him out of retirement.

But he backtracked to claim he would fight Joshua, 32, for FREE and will support his long-time rival against Usyk, 35.

Hall of Famer Warren has predicted AJ will be dealt another loss when he rematches the Ukrainian on August 20 in Saudi Arabia.

He said: “It’s quite intriguing really. Everybody is interested, including me and Tyson.

“I think AJ has a tough fight, I don’t know what he can add to his armoury to beat this guy. I think Usyk has his number.”