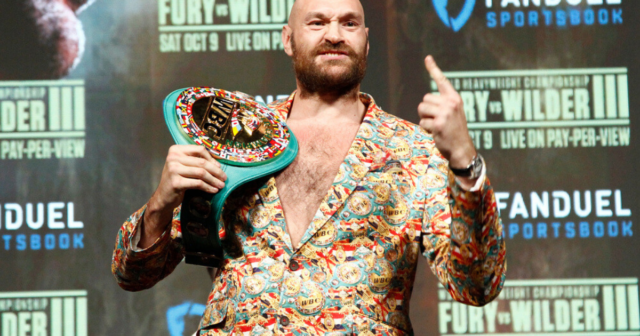 BOB ARUM would rather welcome 10,000 travelling Brits to Las Vegas than promote a fight between Tyson Fury and Dillian Whyte on home soil.

Fury faces Deontay Wilder in a trilogy bout on Saturday night in Sin City, following his rematch win in 2020, after the original ended all square.

Then, on October 30 Whyte, 33, fights Otto Wallin, 30, and the winner will be mandatory for the WBC title.

It means Fury, who needed 47 stitches after beating Wallin in 2019, could be ordered into a massive all-English affair with Whyte.

But his US promoter Arum fancies doing it in the fight capital of the world, opposed to in the heavyweights’ backyard.

“The big fights belong here. Sometimes you do it in the UK, but the PPV in the US is robust.

“The gate – the travel ban will be lifted in November – 10,000 Brits would come over here for the fight.

“They wanna come to Vegas, and Vegas is made for those kind of tours, so it works better here than any place in the world.”

And the Gypsy King, who after drawing to the Bronze Bomber signed a deal with Arum’s Top Rank promotion, vowed NEVER to fight at home again.

He has since adopted America as his training base, and prefers the Stateside crowd.

But more recently, Fury has opened up to the idea of fighting in front of his faithful and has the backing of his other promoter Frank Warren.

Speaking to BBC, Warren said: I think he’ll be back here which will be a great homecoming.

“Dillian Whyte is a big fight, providing he beats Otto Wallin which isn’t a forgone conclusion. There’s some big fights for him.”