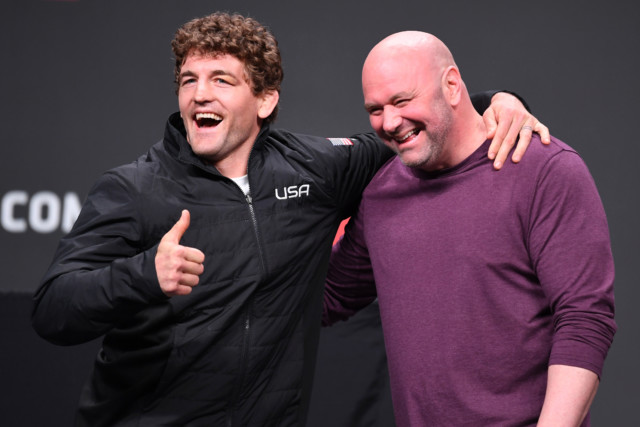 BEN ASKREN revealed it was UFC president Dana White who set him up with legendary boxing trainer Freddie Roach.

Askren, who retired from the UFC in 2019, is preparing to fight YouTuber Jake Paul on April 17.

Paul has called out White several times, and his leading star Conor McGregor.

And the promoter has grown such a dislike to the social media star, he was willing to help Askren out by linking him up with Roach in Los Angeles.

“Even when the UFC traded for me, Dana and I weren’t buddy buddy necessarily and now he really wants me to beat up Jake Paul.”

Askren was long considered the best MMA talent outside of the UFC, and White refused to sign the former Olympic wrestler.

But in 2018, Askren traded with ex-UFC champion Demetrious Johnson, who instead moved to ONE Championship in Asia.

The American grappler had three UFC fights, losing two, the last against Damian Maia in October 2019.

Afterwards, Askren retired and underwent hip surgery, but this January accepted a fight against Paul.

The internet sensation has two knockouts in as many fights, but only against online rival ‘AnEsonGib’ and ex-NBA player Nate Robinson, 36.

Paul, 24, wanted to up the anti to $2m alongside rapper Snoop Dogg, but they were never taken up on the offer.