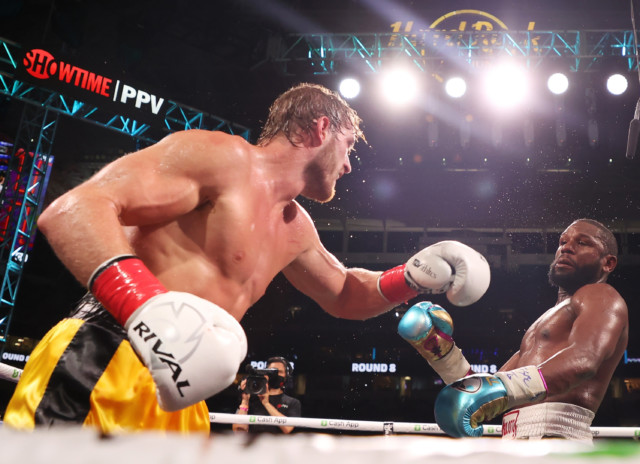 Boxing legend Mayweather and YouTube sensation Paul went the full eight round distance in Miami, to the surprise of many.

White and boxing promoter Eddie Hearn were among those critical of the pay-per-view exhibition, which still sold a reported 1million pay-per-views.

But UFC commentator Rogan was full of praise for the spectacle bout, which Mayweather had boasted could earn him up to $100m (£70m).

He said on his renowned podcast: “For people who got mad at it, I get it — it’s not Floyd Mayweather vs Manny Pacquiao from five years ago.

“But what it is is one of the best boxers of all time making $100million fighting a guy that’s three feet taller than him and 35 pounds heavier than him who can’t win.

“It’s amazing, it’s amazing. That fight was amazing.There’s a lot of amazing things. First of all, Floyd is amazing.

“The fact that Floyd has the balls at 44 years old to decide, ‘Oh I’m gonna fight some dude that’s 35 pounds heavier than me and 26 years old’.

Mayweather, 44, officially hung up the gloves in 2017, after beating ex-UFC champion Conor McGregor, 32, in ten rounds.

He did make a brief return a year later in a one round demolition against featherweight kickboxer Tenshin Nasukawa in Tokyo.

Paul, 26, meanwhile had boxed only twice before, both against online rival KSI, drawing the first in 2018 before losing the rematch a year on.

But he did have a farcical TWO STONE weight advantage over Mayweather, which he used to survive and claim moral victory by going the distance.

White, who urged Mayweather to retire, attacked the exhibition showcase and argued the real losers were the paying customers.

He told UFC Arabia: “That wasn’t a f***ing boxing match. Like I said before, there’s always going to be a market for that kind of stuff.