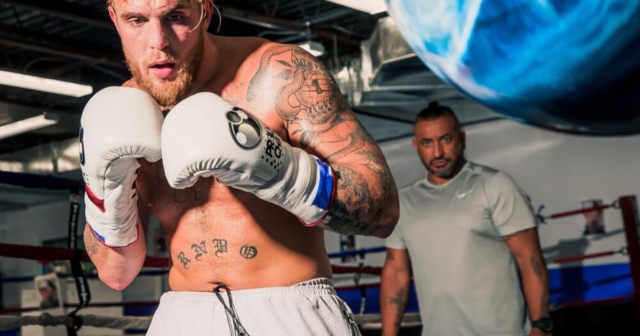 UFC star Dustin Poirier admits he’d consider himself a ‘bum’ if he couldn’t knock out Jake Paul in under three rounds.

YouTuber Paul is currently gearing up for a boxing match against Tyron Woodley.

Jake Paul has ruffled feathers in the boxing and MMA worlds

The former Disney actor turned professional boxer is the favourite going into his showdown, after defeating Woodley last time out.

The entire MMA community is rooting for Woodley to put a beating on the outspoken Paul brother.

And if he were in Woodley’s shoes, Poirier would be embarrassed if he didn’t get the better of the social media star early in the contest.

He tweeted: “Also while Im at it if i can’t get Jake Paul outta there in 3 rounds im a bumb [sic].”

The Diamond was quickly quizzed about Paul’s relationship with his American Top Team team-mate Jorge Masvidal.

A fan tweeted: “Why is Jorge friends with him after Jake called you a bum fighter?”

And the Louisiana fighter didn’t mince his words when responding to the question.

He said: “Ask Jorge what he thinks will happen if i put them paws on Jake.”

Woodley revealed he took ’20 seconds to say yes’ to a rematch with Jake Paul after Tommy Fury’s pull out.

It set up the huge celebrity grudge match which was set for December 18 in Florida.

But Fury this week pulled out with a broken rib and chest infection, while Woodley signed as his replacement.

Did you miss our previous article…
https://www.sportingexcitement.com/boxing/conor-benn-kept-family-with-him-for-chris-algieri-fight-camp-and-insists-theyre-his-ultimate-motivation

Advertisement. Scroll to continue reading.
In this article:dustinpoirier, jakepaul, tyronwoodley