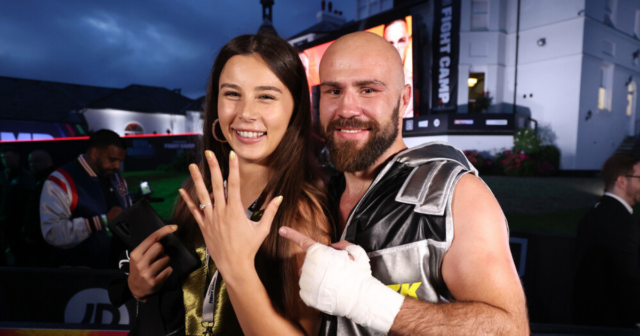 ALEN BABIC proposed to his partner live on DAZN in front of interviewer Laura Woods after beating Mark Bennett.

The Croatian, known for his crazy antics, improved his record to 8-0 at Eddie Hearn’s ‘Fight Camp’, staged in the promoter’s Essex back garden.

Alen Babic proposed to his partner live on DAZN

And afterwards, he celebrated in style by tying the knot with his girlfriend.

The screen read: “Lady savage… will you marry the savage?”

Babic, managed by heavyweight contender Dillian Whyte, then got on one knee and pulled out a ring and got the all important yes.

In the main-event, Kid Galahad beat Jazza Dickens in the 11th round to win the vacant IBF world featherweight title.

Galahad, 31, who lost to Josh Warrnington, 30, when challenging for the same belt in 2019, called for a rematch.

He said: “It’s unbelievable. After 19 years’ hard work, I’ve finally got the title round my waist. It’s been a long time.

“I didn’t want to leave it to the referees or judges. Now I want to win a couple more titles and unify the division.

“If I fight Warrington, he’s not going 12 rounds.”

Dillian Whyte told the BBC: “Dickens is a brave man but I think they made him take too much punishment.

“His nose went, his eyes went, but his corner should have protected him better tonight.”

Did you miss our previous article…
https://www.sportingexcitement.com/boxing/dominant-lauren-price-wins-boxing-gold-for-team-gb-with-flawless-performance-on-final-day-of-tokyo-olympics

Advertisement. Scroll to continue reading.
In this article:fightcamp, markbennett, theknot