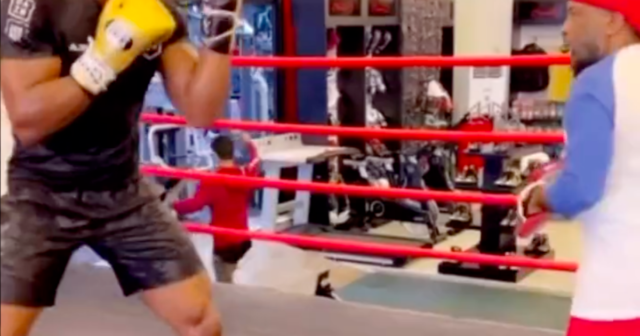 ANTHONY JOSHUA has been captured training in Dubai with US coach Anthony ‘Chill’ Wilson.

The former unified heavyweight champion has spent the end of the year trailing potential new trainers in America.

But AJ took himself to the Middle East over the festive period but proved there is no rest for the wicked as he was filmed hitting pads in Dubai.

It comes as he prepares to enter training camp for his rematch with Oleksandr Usyk, following a September loss to the Ukrainian.

Ever since then, Joshua fuelled speculation he could be preparing to either move away or add to his team.

AJ was led to Olympic gold and world honours as a professional under Rob McCracken in Team GB’s Sheffield’s HQ.

But after losing to Usyk, 34, Joshua, 32, visited several trainers and gyms in America.

A decision has not yet been announced but promoter Eddie Hearn this month admitted a change of scenery is possible.

He said: “I feel it might be time to move on from that environment because when you’ve been there since you were 18 and you go into GB and Anthony Joshua is everywhere, he’s a god.

“I just feel it’s time to rough him up a little bit, not in log cabins in the middle of nowhere.

“But up there it’s ‘oh my God, it’s AJ!’ because they’re proud of him. Rob is not necessarily gone.

“That’s a conversation for those guys and it’s very difficult because is more than just a trainer, he’s a mentor to him, an advisor, a friend.

“It’s not just about who’s training him, it’s about where that’s going to take place.

“He’s talking to people and I think he will make a decision early in the new year.”

Joshua has invoked his right to an immediate rematch with Usyk, which Hearn recently revealed is heading for an April date.

He told iFL TV: “We’ve got to get together and decide a date. April is realistic for that fight.

“AJ is the type that fights twice-a-year, and sometimes we feel like it would be nice to fight three times-a-year.

“We’ve had offers from around the world, but I think the UK will stage that fight.”

Oleksandr Usyk is set to rematch Anthony Joshua in April
Advertisement. Scroll to continue reading.
In this article:anthonyjoshua, hasbeen, indubai