Garcia considers training partner Canelo and brother and mentor, as both share the same gym and coach, Eddy Reynoso.

The Triple C and @canelo get into exchange of words over @kingryan . He will bend the knee to Triple C. Stay tune the comeback @elieseckbach pic.twitter.com/7xx8L0E9aG

The pound-for-pound king and Reynoso were guests on Mike Tyson’s podcast, with ex-UFC champion Cejudo present.

There, the Olympic gold medalist was captured talking up a crossover fight with lightweight sensation Garcia.

Cejudo, 34, then joked: “He’s being nice about it! He’s not telling the truth.

Cejudo has previously challenged Garcia, 22, who himself has called out UFC legend Conor McGregor, 32, and his sparring partner Dillon Danis, 27.

But Cejudo later retired in May after beating Dominick Cruz, 36, and vacated his bantamweight belt.

It was inherited by Petr Yan, 28, but the Russian threw it away after illegally kneeing Aljamain Sterling, 31, before being disqualified.

Catch me if you can!

Afterwards, Cejudo announced he was making a comeback and wanted to fight the pair.

He then called to face rival Gervonta Davis, 26, or his hero Manny Pacquiao, 42, but talks collapsed with both. 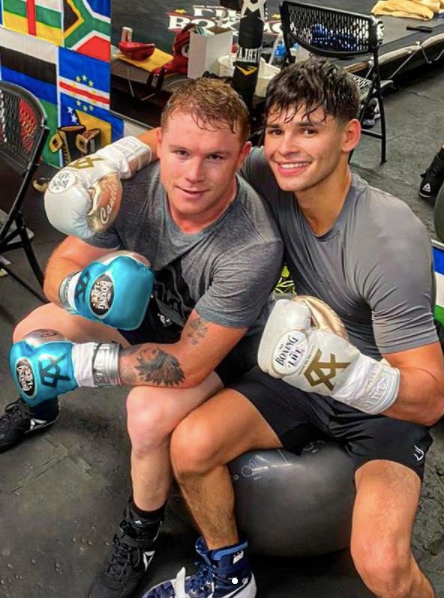 Canelo Alvarez pictured with protege Ryan Garcia
Did you miss our previous article…
https://www.sportingexcitement.com/2021/03/12/ben-askren-admits-he-is-baffled-by-jake-pauls-popularity-and-brands-youtuber-an-idiot-who-is-too-stupid-to-learn/
In this article:caneloalvarez, Cheltenham, henrycejudo, olympicgoldmedalist