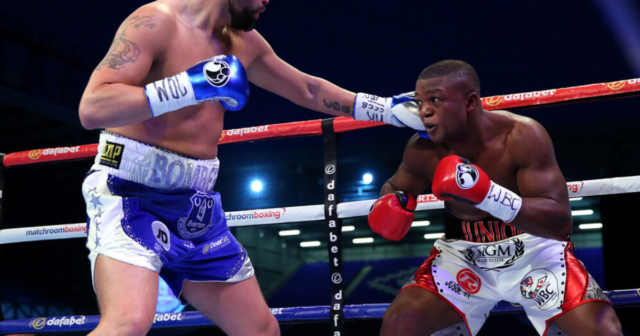 After the news the WBC green lit Canelo’s request to jump to CRUISERWEIGHT, several would have been quickly googling Makabu’s name.

#OnThisDay in 2016 @TonyBellew won the WBC cruiserweight title with a sensational third-round knockout of Ilunga Makabu at @Everton pic.twitter.com/QanGBXRLsc

But others would have recognised him from the 2016 world title fight he had with Bellew, at the Evertonian’s beloved Goodison Park.

It was his coronation night and capped off three chaotic rounds of explosive action.

Bellew, now 38, was down in the first round following a left hand, which was so hard the Brit did a backwards roll.

But Makabu, 34, was brutally knocked out on the ropes half way through round three after a devastating left hook.

It did prove to be the cruiserweight’s last career loss, winning nine since, beating Pole Michal Cieslak, 32, for the vacant WBC belt in January 2020.

Canelo, 31, meanwhile has won belts from light-middleweight all the way to light-heavyweight.

Talk has quickly turned to what could be next for Canelo, who is currently a free agent.

But moving as high as the 14st 4lb cruiserweight, which is over TWO STONE more than Canelo’s usual fighting weight, has emerged as a new avenue.

And promoter Eddie Hearn revealed Bellew has personally warned him of the power Makabu possesses.

“I was speaking to Tony Bellew – who could be looking real good in a few months if this happens – and he said that Makabu is a huge puncher, huge puncher, and very strong.”

Hearn added: “I like the fight against Makabu. I think it’s a dangerous fight, I think it’s an exciting fight and as I said, Saul and Eddy are interested in making history.