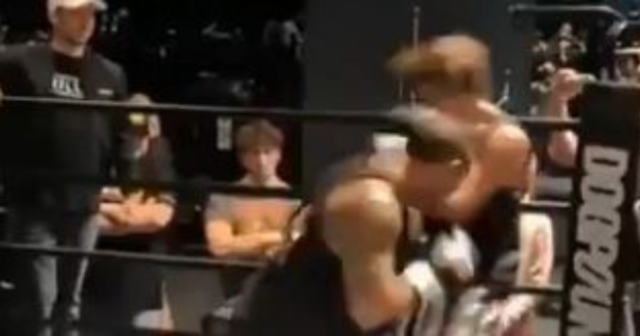 Belfort, a former UFC champion, fights Oscar De La Hoya on September 11 in the boxing legend’s return to the ring.

The bout raised eyebrows initially, with the Brazilian, 44, having boxed just once before, in 2006, while De La Hoya, 48, has been retired 13 years.

The pair filmed a sparring session which was posted online and could only be described as one-way traffic.

Belfort twice trapped a sheepish-looking Hall in the corner and left him feeling the affects of some brutal body shots as he was floored.

The American celebrity was quick to defend himself on Twitter having likely been mocked for his defenceless display.

Hall, 21, tweeted: “why do people hold me to the boxing standard of a pro when ive only trained in boxing for 2 months?

“im learning and trying to get better! sorry im not floyd mayweather yet.”

Hall faced McBroom, 29, in a TikTok vs YouTube boxing event in June – representing the former.

But it ended in disaster for him, as he was dominated, punched around the ring and beaten in three rounds.

It leaves Belfort needing better sparring partners as he draws closer to his crossover fight with De La Hoya.

The veterans were initially set to box in an exhibition bout, but it will now be a professionally sanctioned contest at the Staples Center in Los Angeles.