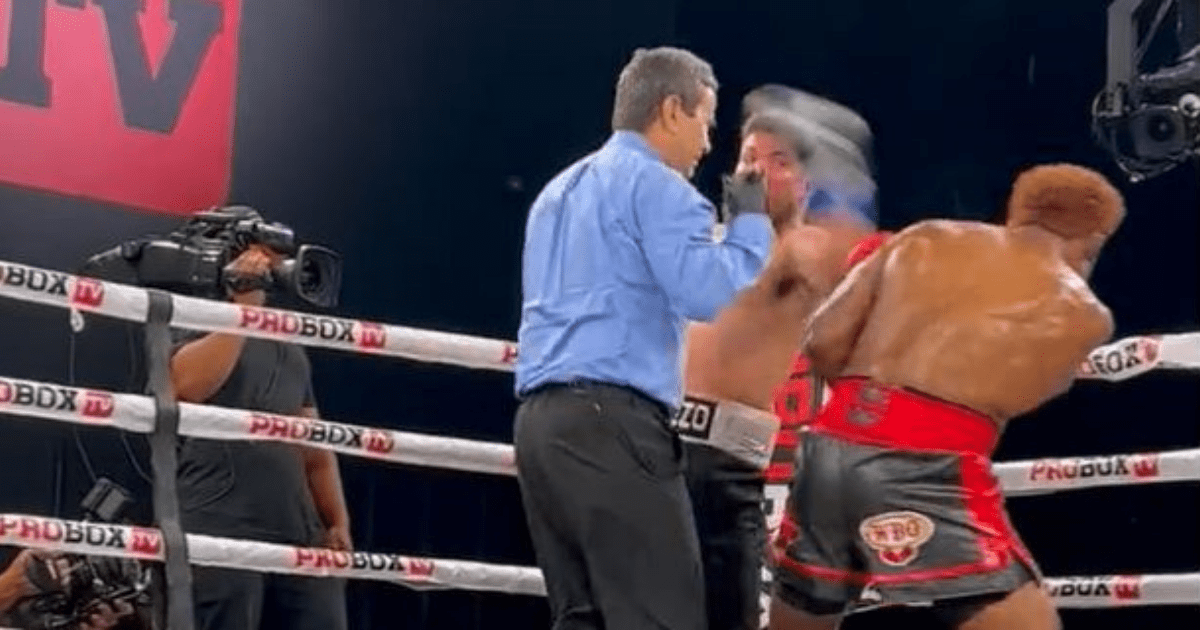 A BOXING referee showcased his world class granite chin after he was caught flush with a left hook by Mexican star Mario Aguilar.

Aguilar was in action against unbeaten cruiserweight prospect Brandon Glanton with the vacant WBO Global title on the line.

Going into the contest as a massive underdog, the 31-year-old was looking to land huge bombs in his quest to cause an upset.

And he landed with a perfect shot he would have been dreaming about… only it connected with the referee.

But in incredible scenes, the official simply shrugged it off after initially stumbling backwards in a video shared by Twitter user @GloversStories.

He then resumed his duties where he then separated Aguilar and Glanton, after the latter was put in a headlock.

The fight didn’t last too long after that as Glanton racked up his 17th consecutive victory after knocking out his opponent with a left hook to the body in the second round.

But it was the referee’s iron jaw that proved to be the talking point, as @GloversStories said: “THE REFEREE HAS GOT A CHIN.”

Replying to the video, boxing promoter Loui DiBella tweeted: “This actually happened tonight. Best punch of the round lands flush on the ref.”

Another commented: “He took that well.”

This boxing supporter then quipped: “[Amir] Khan would have been doing the chicken dance after that landed.”

Meanwhile one joked: “What the clip doesn’t show is the ref coming back with a steel chair.”

Referee’s being accidentally punched isn’t uncommon inside the squared circle, with a female official showing her toughness after being hit during a heavyweight contest in the Commonwealth Games.

Though Mexican ref Jesus Granados had to leave the ring on a stretcher in April after he was struck by Irvin Turrubiartes.

In this article:boxer, jobs, theface