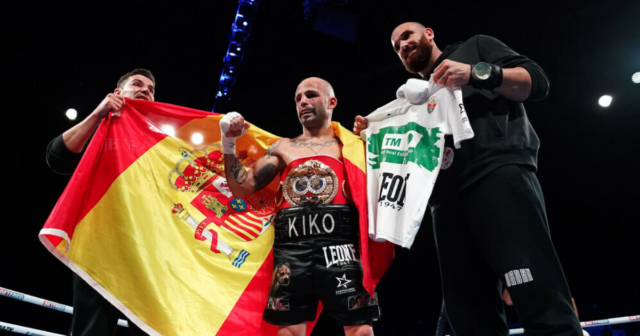 The veteran – now of 55 fights – had lost on six of his seven previous visits to the UK, against stars like Josh Warrington, Scott Quigg, Carl Frampton and Rendall Munroe.

KIKO MARTINEZ KNOCKS OUT KID GALAHAD WITH THE FIRST PUNCH OF THE SIXTH ROUND!#GalahadMartinez pic.twitter.com/ztiAREQKyo

But he made up for the misery by starching the 31-year-old hometown favourite with identical right hooks at the very end of the fifth and start of the fifth.

Galahad, in just his second defence, was coasting into a wide lead when he was smacked with just 10 seconds of the fifth remaining.

He recovered after an eight count and got a minute to recuperate but it was all over just six seconds into the sixth when 35-year-old Martinez unleashed an identical shot and was crowned world champion.

So Saturday night was supposed to be a proud homecoming for the local lad forged in Sheffield’s legendary Ingle gym.

Hyper-dedicated Galahad, who is in bed at 7pm every night, looked on the cusp of a very early night against the respected Spaniard.

After switching stace a couple of times in the first round, a precise shot or two clipped Martinez’s skull and he seemed to stiffen and stagger but managed to recover quickly.

The Alicante brawler tried to make it a dog fight as early as the second but ice-cool Galahad kept the fight at range and picked him off at distance.

When Martinez and his goatee beard lunged in with hooks, the Brit pivoted out of danger and countered crisply.

Martinez, giving away height and reach advantages, was trying to barrel his way through Galahad’s guard but the champ was too quick and clever to be breached.

Galahad needed to strip off to make weight on Friday but only showed off his naked ambition to unify the 9st division with his third round display.

Martinez could not handle the befuddling switch hitting ambidextrous Galahad has mastered after years of practice in the Wincobank gym Brendan Ingle created.

By the start of the fourth, Martinez’s right eye was pink and grazed as Galahad played matador over the bullish yet bamboozled visitor.

Growing in confidence, Galahad landed a couple of adventurous uppercuts but Martinez continued dipping forwards and slashing away unsuccessfully.

And the knowledgeable Sheffield arena crowd roared when the local lad produced some dazzling defensive footwork to evade an attack when it seemed he was backed into a corner.

Then it all went wrong in sensational fashion.

With Galahad coasting, Martinez landed a brilliant right hook that collapsed the heavy favourite into the floor.

The Qatar-born ace needed eight to recover and then the bell went to end the session.

Trainer Dominic Ingle had 60 seconds to help his man recover and cling on to his title.

But as soon as he walked back out he was demolished with a magnificent punch that shattered him into the floor.

The referee waved the bout off without even thinking about a count and the medical staff dived in instantly to make Galahad could get oxygen.

Thankfully he rose to his feet and walked back to his corner for emergency care while Martinez was able to celebrate a wonderful win for the old warhorse.

Advertisement. Scroll to continue reading.
In this article:joshwarrington, scottquigg, theuk