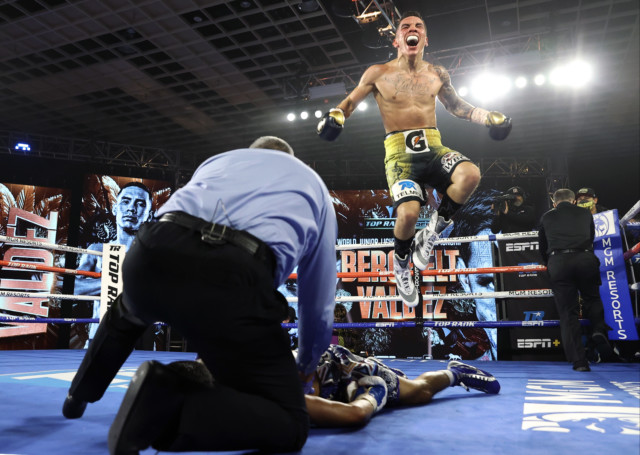 The countrymen, who have feuded since their amateur days, finally settled the score in Top Rank’s behind closed doors bubble in Las Vegas.

Take it all in. Just wow, @oscarvaldez56. 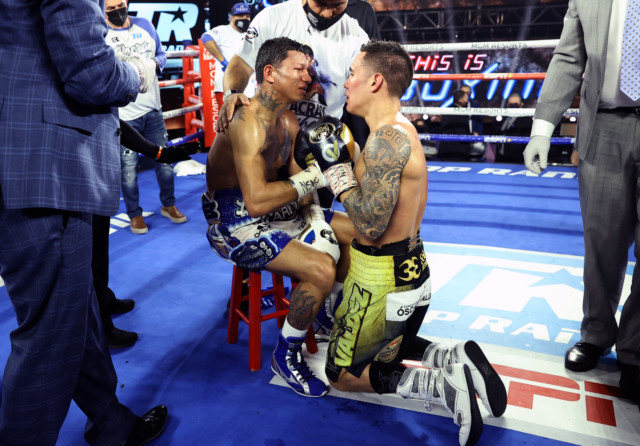 Miguel Berchelt recovers after his defeat 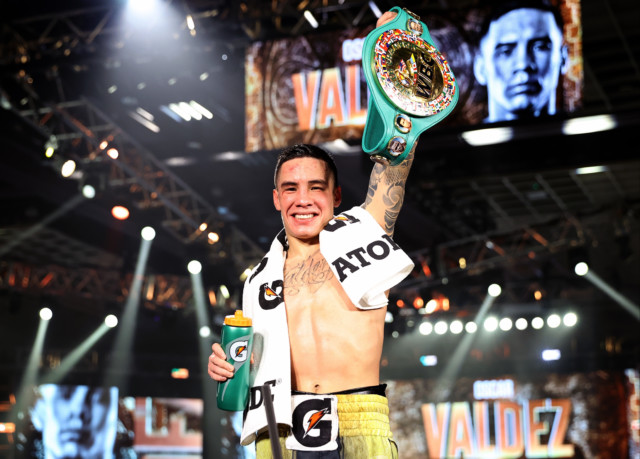 Valdez, a training partner of Canelo Alvarez, asserted himself as the dominant and more accurate puncher from the off.

The ex-featherweight champion made a breakthrough in round four after a left hook wobbled Berchelt, who was defending his WBC super-feather title.

Valdez, 30, kept up the pressure and after a barrage of shot landed, a standing eight-count was called.

Berchelt, 29, found himself on the deck again in the ninth after the challenger turned southpaw and again found the target with a rapid combination.

Valdez sensed blood and the chance to become a two-weight champion and in round ten he emphatically closed the show.

As Berchelt rushed forward, the double Olympian ducked under a hook and his counter left hand connected right on the money, viciously ending it all there.

Valdez let out a war cry and rushed around the ring having achieved his dream of winning the famous green and gold Mexican WBC belt.

Meanwhile Berchelt was left folded and face down on the canvas.

𝙃𝙄𝙂𝙃𝙇𝙄𝙂𝙃𝙏𝙎 Featuring a KO of the Year frontrunner from @oscarvaldez56 that set the bar high for the entire sport the rest of 2021.

After the win, Valdez said: “There’s nothing better in life than proving people wrong. I have a list of people who doubted me. My idols doubted me.

“Boxing analysts doubted me. They said Berchelt was going to knock me out.

“I have a message to everybody: Don’t’ let anyone tell you what you can and can’t do.”

Afterwards, pound-for-pound king Canelo shared a FaceTime call with his gym-mate and congratulated Valdez on the win.

Berchelt was rushed to hospital and had a precautionary brain scan but his CT was all clear and he was later released from hospital.