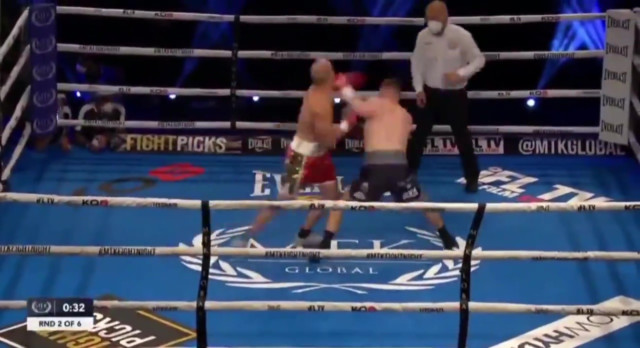 IRISHMAN Pierce O’Leary put himself in knockout of the year contention after his huge left hand left Jan Marsalek out cold.

The super-lightweight moved to 7-0 in devastating fashion at the Bolton Whites Hotel.

Knockout of the year from @pierce_oleary

O’Leary was controlling the action behind his jab and just before the KO landed a nice body shot.

After a right hand missed the target, Marsalek tried to return fire with a rear cross of his own.

But in classic boxing 101 style, it was O’Leary who made his man miss and pay as he countered with a perfect left hook.

Czech Republic’s Marsalek, 33, was left face first on the floor as the referee rightfully waved off the fight immediately.

Despite the highlight-reel KO, O’Leary gave a humble post-fight interview as he gave his well-wishes to his opponent.

He said: “First and foremost I just want to make sure I wish him a speedy recovery, make sure he’s OK and gets home to his family.

“Because at the end of the day, boxing’s not a sport it’s – I don’t know what to say it is – but it’s a tough sport anyways.

Edwards, 25, said: “He was relaxed whilst really asserting his dominance straight away.

“He was landing nice clean shots and he was rolling his shoulders well.

“I really liked the way he was managing the distance, the space between him and his opponent.

“But I think he knew and he was waiting for the shot to come and he had the confidence in his punch power and he got him out of there in brutally devastating fashion.

“Shots that after the fact I don’t really like watching too many times again if I’m perfectly honest, but greats performance and he moves on.”