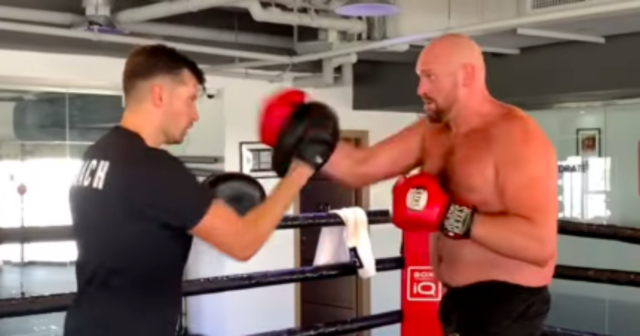 TYSON FURY claimed he could beat Dillian Whyte with ‘one hand behind my back’ as he continued his training camp in Dubai.

The 33-year-old rivals were subject to a record-breaking purse bid which was won by Fury’s promoter Frank Warren following a £30.6million offer.

Whyte has been almost radio silent since the fight announcement, whereas the Gypsy King has been full of trash talk.

And while out training in Dubai, Fury took the chance to take another swipe at his former training partner while discussing tactics ahead of their fight.

He told: DubaiEyeSport: “Whatever I feel like on the night really. Because I don’t pay these bums too much attention, to be fair.

“Whatever I feel like on the night. Any style, I can definitely beat Whyte. Even if I put one hand behind my back and one foot off the floor, I’ll still beat him.”

It is believed the pair have now both received contracts to fight meaning confirmation of the date and venue is nearing.

Fury also mocked Anthony Joshua, 32, when asked if he believes they will ever finally fight.

He responded: “I’m not sure what to think about Anthony Joshua anymore.

“Quite frankly, nobody cares about him anymore. But I’ll knock him out just for bants, maybe.”