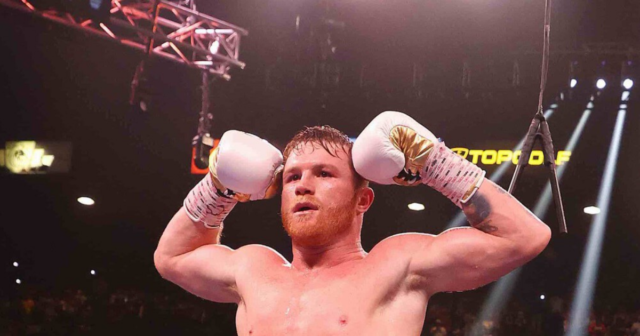 CANELO ALVAREZ’S coach wants the Mexican star to face Gennady Golovkin and settle their trilogy in a homecoming.

Alvarez was fortunate to walk away with a draw in their initial 2017 fight and won the rematch a year later, again in contentious fashion.

Canelo has since moved up in weight, becoming a four-division champion with belts from light-middleweight all the way up to light-heavyweight.

Meanwhile, Golovkin has remained at 160lb and unifies his IBF title against Ryota Murata’s WBA version on December 29.

Canelo has previously warmed his great rival they can only do battle once more if it is at super-middleweight, where he reigns as undisputed king.

And trainer Reynoso wants the bitter trilogy fight back home in Mexico, where they have not fought since 2011.

He said, via Fight News: “We would like to face Golovkin for a third time to close that chapter. I think we can make it happen.

“I would like for Golovkin to come to Mexico. We can make that fight happen in Guadalajara or Mexico City.

“We hope to make it happen. He hasn’t mentioned Canelo’s name, he has a fight in December against Murata in Japan.

“We’ll see what happens in that fight and perhaps we can make Canelo vs GGG 3 happen.”

Golovkin, 39, has never fought outside of middleweight, the division Canelo, 31, left in 2019.

After Alvarez moved up in weight, he even won the WBO light-heavyweight title in 2019 against Sergey Kovalev, 39.

But Canelo has since settled back down at super-middleweight and won all four belts within 11 months.

Amazingly, Canelo is now braced to step up to CRUISERWEIGHT after the WBC accepted his request to challenge champ Ilunga Makabu, 34.

Moving as high as cruiserweight means fighting at 14st 4lb , which is over TWO STONE more than Canelo’s usual weight.

Reynoso told ESPN Deportes: “What he has done with the heavyweights he spars with, and that is why we asked for the fight.

“We know that [Makabu] is strong, but Canelo can beat him.

“Many may say that it is crazy, but they also said that it was crazy when Canelo was junior middleweight champion and we were looking for middleweights, super middleweight, light heavyweights.

“I have a lot of confidence in Canelo. He is very strong and has many qualities, and I know that he is going to win that fight.”

Advertisement. Scroll to continue reading.
In this article:gennadygolovkin, themexican, walkaway