What is the difference between horsehair and foam-padded boxing gloves?
Advertisement 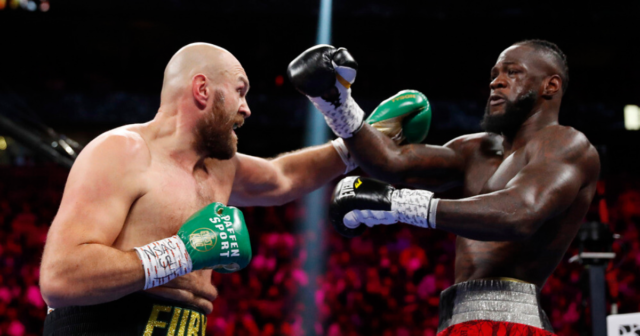 BOXING often throws up plenty of disagreement and conflict, especially between some of the sport’s biggest stars on fight week.

One particularly contentious part of fight week is glove selection, where both fighters and their respective camps will inspect and choose the gloves they will where on fight night.

Often, this is a smooth process, but as seen with Tyson Fury’s third fight with Deontay Wilder, it’s not always plain-sailing.

Wilder had already thrown accusations about the legality of Fury’s gloves for their second fight in 2020, and the Bronze Bomber wasn’t happy when Fury selected the same style of glove for the trilogy.

Fury famously wears horsehair material gloves, while Wilder has worn foam padding in his throughout his career, and both are legal.

But who do fighters get so antsy over glove selection? SunSport have rounded up all you need to know about one of the key formalities of fight week, and the differences between the two types of glove.

What is the difference between horsehair and foam-padded boxing gloves?

It sounds self-explanatory – one gloves has horsehair in it, the other has foam.

But the use of horsehair in gloves, a tradition nearly as old as the sport, has been hotly-contested in recent years.

Horsehair padding provides the glove with less protection to both your hands, and your opponent’s face, therefore it favours those in the ring who consider themselves to be a knockout artist, or someone with really heavy hands.

Horsehair gloves are durable, though they absorb sweat easier, thus wearing the padding down quicker than that of their foam relatives.

Dubbed a ‘puncher’s glove’ horsehair gloves are often used by fighters with a come-forward Mexican style of fighting, or those seeking stoppages in their fights, much like Fury did against Wilder.

Fury wore Paffen branded gloves for both the rematch and the trilogy against Wilder, after he employed Kronk coach SugarHill Steward to train him to KO the American.

Paffen gloves use horsehair padding, unlike the majority of modern boxing gloves which use foam padding.

Following their second fight, in which Wilder was stopped in seven rounds, the Alabama native complained Fury’s gloves had an insufficient amount of padding in them, and that Fury’s punches left a dent in his face.

Foam padded gloves have become more popular over the past two decades, as they keep your hands protected and they absorb shock better than horsehair gloves do.

Once Wilder found out that Fury would be using the same gloves for their trilogy, however, he opted to use Everlast MX instead, a horsehair-foam mix, in order to even the playing field.

Another fighter who was opposed to horsehair gloves was Floyd Mayweather, who often had it written into his fight contracts that his opponents weren’t allowed to use gloves with that type of padding.

Conor McGregor was famously banned from using horsehair for their fight back in 2017.

And Marcos Maidana had to change his gloves from horsehair to foam in 2014 on fight week after Mayweather came away from glove inspection less than impressed with the Argentine’s choice of glove.

Maidana ended up wearing Grant branded gloves, which Mayweather wore for most of his storied career.

Grant gloves are known as the best gloves on the market for those who want their hands to be ultra-protected, and they were perfect for Mayweather, who often suffered with hand injuries.